THE first Régiolis EMU for the cross-border Léman Express network around Geneva was unveiled at Alstom’s Reichshoffen plant on April 10 in the presence of Mr Martine Guibert, vice-president of the French region of Auvergne-Rhône-Alpes, Mr Jean-Charles Ogé, strategy and finance director of SNCF TER Auvergne-Rhône-Alpes, and Mr Jean-Baptiste Eyméoud, senior vice president of Alstom France. 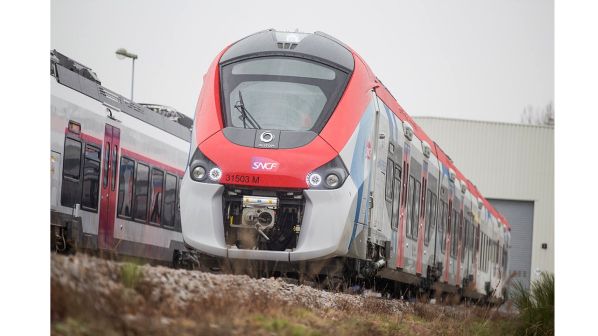 The €160m order for 17 trains was placed in June 2015 using an option from a framework contract awarded to Alstom by SNCF in 2009.

Deliveries are due to start in the summer and the fleet will enter commercial operation in December.

The 230km Léman Express network will serve a total of 45 stations on lines from Geneva to Annecy, Bellegarde, Evian-les-Bains, Coppet, and St Gervais.

The heart of Léman Express is the Cornavin-Eaux Vives-Annemasse (Ceva) project, a 16km line between Lancy-Pont Rouge and Eaux Vives, which will create new direct rail connection between Geneva and Evian-les-Bains.

The network will be operated by a joint venture of SNCF and Swiss Federal Railways (SBB), which will use a fleet of 23 four-car Stadler Flirt EMUs on lines within Switzerland.