The new locomotives would replace traction at two operators. 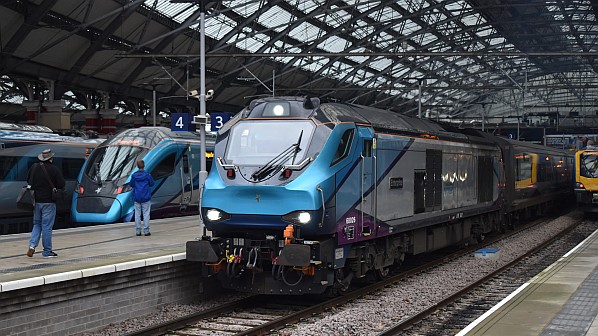 BRITISH company FirstGroup has issued a tender for up to 30 bi-mode locomotives for TransPennine Express (TPE), with an option for a further five units for Great Western Railway (GWR).

According to the tender, the TPE order will be a minimum of 15 locomotives. Currently TPE sub-leases 15 Stadler 2.8MW 160km/h class 68 diesel units from Direct Rail Services (DRS). These were due to haul 13 five-car fixed formation rakes of CAF Mk 5A coaches, built in 2017-2019, but delays with the coaching stock and Covid-19 meant that the full fleet has never been used.

The winning bidder must also supply a full maintenance programme and align maintenance requirements with the Mk 5A fleet.

The Mk 5A sets can be expanded to seven coaches if required, but the tender makes no mention of an order for additional coaches from CAF.

The GWR locomotives would replace re-engineered 95mph class 57/6s introduced in 2004. These were rebuilt from ageing class 47 locomotives dating from the 1960s and were equipped with 2MW General Motors engines and Brush alternators. The locomotives haul the Night Riviera sleeper between London Paddington and Penzance, but have been blighted by reliability problems for much of their careers.

GWR would undertake the maintenance on the locomotives at its Long Rock depot in Penzance, and at its facility in Reading via a Technical Support and Spares Supply Agreement (TSSSA). The operator wants there to be a “step change improvement” on communications between the locomotive and the Mk 3 coaches it would haul, especially with interfaces between the coaches for dispatch and alarm indications.

FirstGroup operates both the GWR and TPE national passenger contracts.

For data on British train orders, subscribe to IRJ Pro.