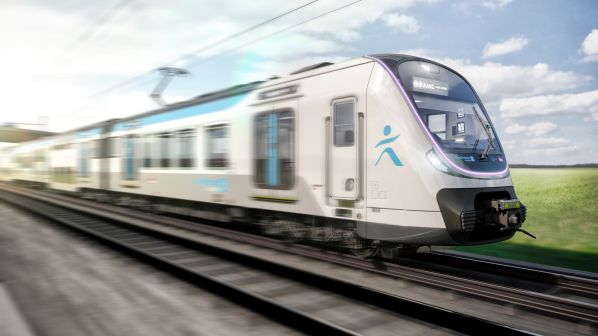 One of the three exterior designs the general public can choose for the new RER Line B fleet.
Photo Credit: Île-de-France Mobility

FRENCH transport authority Île-de-France Mobility has launched an online public consultation to choose the ‘face’ and interior of the 146 MI20 trains on order for Paris RER Line B.

To be built by Alstom and CAF, and operated by RATP and Transilien, the trains will be formed of alternating double-deck cars to increase capacity, while the single-deck cars are designed to encourage speed of ascent and descent at stations, as well as accessibility.

The trains will be 104m long, the same as the current MI79/MI84 trains, and will be formed of seven short cars rather than four long vehicles as per the current fleet. This will limit the gap between the platform and the train, to be limited and therefore making the trains more suitable for curved stations.

Each train will have 345 seats which is about 20% more than the current refurbished trains. Overall capacity will be 1070 passengers, which is around 35% more than the MI79 and MI84 trains. The new fleet will also be equipped with air-conditioning, USB sockets, information screens and CCTV.

Until July 31, the public can choose the designs here. These have already been presented to user associations. The final design will be unveiled at the start of the 2021 school year in September.