Infrastructure work will be carried out ahead of the trains beginning operation. 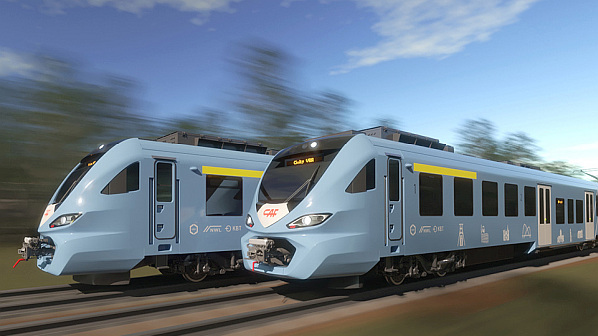 The manufacturer was selected in June 2021 for the contract, which was signed on April 4 in Kempen, Germany. The deal also includes 30 years maintenance. The trains will replace class 648, 643 and 632 DMUs used on the Niederrhein - Münsterland network (NMN) from 2025. The full fleet will be in service by December 2028.

This is the largest BEMU order in Germany and NMN will be the first SPNV network with alternative power. Funding is being provided via loans from the European Investment Bank (EIB) and NRW.Bank.

The BEMUs will feature spacious boarding areas to ensure rapid boarding and alighting. The seats will be fitted in rows and in bays and have a larger pitch than the current fleet. There will be areas for wheelchairs, bicycles and prams. Folding tables, sockets and free Wi-Fi will also be fitted to the trains.

Infrastructure work is required to enable the trains to operate. This will include platform lengthening and platforms being raised for level entry and exit, while Coesfeld station will be electrified. In Kleve, DB Networks will construct an overhead line island system (OLIA) to recharge the BEMUs.

The former colliery railway to Kamp-Lintfort will also be reactivated and extended to the university campus.

State secretary in the Ministry of Transport of the State of North Rhine-Westphalia, Dr Hendrik Schulte, says that the authorities want to encourage more people to travel by public transport and that a green fleet of trains will help this.

The trains will operate on:

The CAF trains will be financed via the NRW-RRX model developed by all public authorities in North Rhine-Westphalia. Future operators of the lines are being sought in a separate procedure and have not yet been determined.