Go-Ahead and Stadler at odds over TMH fleet maintenance contract

Stadler says it is not happy with a rival manufacturer maintaining its fleet. 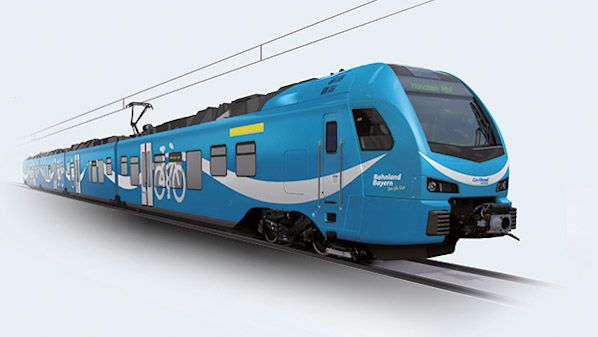 BRITISH operator Go-Ahead and Swiss manufacturer Stadler have butted heads over the maintenance of a new fleet set to operate two German regional contracts, after the operator awarded TMH International a contract to maintain the trains.

Go-Ahead is due to begin operating two German regional contracts over the next 18 months with new fleets. Stadler is delivering 22 four-car Flirt EMUs for Bavaria’s Allgäu Electric Network (Munich - Lindau) contract, which begins in December 2021, while 44 three-car Mireo and 12 five-car Desiro HC EMUs are on order from Siemens for the Augsburger Network, which is due to start in December 2022.

Go-Ahead awarded a contract to maintain the fleets to the international subsidiary of Transmashholding (TMH) in December. The contract is TMH International’s first major passenger train maintenance contract in Germany, and marked a change of approach for Go-Ahead, which already operates a fleet of 56 Flirt EMUs in the neighbouring state of Baden-Württemberg. Stadler was awarded a 13.5-year maintenance contract for that fleet, but the introduction of these trains has been disrupted with low availability leading to cancellations and the temporary use of hired replacement trains.

Earlier this month, a dispute between Stadler and Go-Ahead concerning the TMH International maintenance contract became public and rapidly escalated. Media reports in Germany suggest that Stadler objected to TMH International maintaining the Flirt fleet as it would have to provide full technical information to a company it considers a direct competitor, leading to potential industrial espionage.

Go-Ahead Germany managing director, Mr Patrick Verwer, told local media on May 6 that following talks with Stadler “the fundamental differences could not be bridged.” Verwer said the E-Network Allgäu services would probably have to start with replacement trains in December instead of the Flirt EMUs, despite most of them already being manufactured. Verwer added that it was “incomprehensible to Go-Ahead that Stadler does not want to hand over the trains and the associated maintenance documents as contractually agreed.”

Stadler immediately responded with a statement saying that the contract with Go-Ahead explicitly ruled out allowing a competing manufacturer to maintain the trains, which Stadler considers TMH International. Stadler also pointed out that as the Flirt fleet was on schedule for delivery and had already obtained all necessary German approvals for use, “it was incomprehensible to Stadler that Go Ahead Bayern is considering using replacement trains instead.”

The motivation for Stadler’s complaint is unclear; its Kiss double-deck EMUs which operate in Russia are already maintained at depots operated by TMH subsidiaries. The concept of competitors maintaining other manufacturer’s trains is also not unheard-of: Alstom maintains the CAF-built class 397 EMUs and mark V Nova 3 push-pull trains used by British operator TransPennine Express at the Longsight depot in Manchester.

Siemens, which is supplying the other fleet which TMH International will maintain, told IRJ on May 7 that “we are aware of the maintenance decision and are in negotiations with the customer Go-Ahead. Due to these ongoing negotiations, we do not wish to comment on this topic at the moment.”