BRITISH open-access operator Grand Central has announced it is investing more than £21m to lease 24 coaches and five locomotives to operate services between Blackpool North and London Euston, which are due to launch later this year. 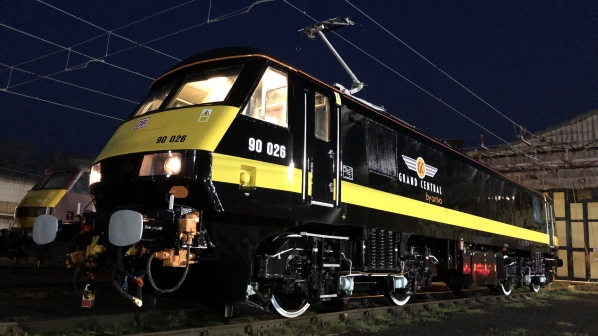 Grand Central is leasing four six-car sets of Mk4 coaches from Eversholt Rail until December 2026, which will be maintained at Alstom’s Wembley depot in London and serviced overnight at Arriva North’s Blackpool depot.

The former LNER coaches are currently undergoing a £1.5m refurbishment at Alstom’s Widnes facility, including the addition of the Grand Central livery and a full interior refresh. Each of the trains running on the Blackpool - London route will include first class coaches, free Wi-Fi, a buffet, toilets for passengers with limited mobility and baby changing facilities. They will also provide wheelchair and priority seating.

Driver training is due to begin along the route in March, using three sets of Mk4 coaches secured under a short-term lease from Eversholt Rail.

Grand Central has also hired five class 90 electric locomotives from DB Cargo UK, the first of which has been painted in the Grand Central livery. Four locomotives will be in service at any one time, with one spare for maintenance purposes. The trains will be maintained by DB Cargo UK at Crewe Electric Maintenance Depot.

The electric non-tilting trains will operate along the Blackpool - London Euston route, but are also cleared to operate along other routes between Blackpool, Preston, Nuneaton, Milton Keynes and London if diversions are needed.

Under plans approved by the Office of Rail and Road (ORR) in June 2018, the company will operate five new direct services between Blackpool North and London Euston Monday - Saturday, with four services on Sundays. All trains will stop at Preston and Nuneaton, with most stopping additionally at Milton Keynes.

Grand Central says it has successfully recruited sufficient train drivers and is in the final stages of recruiting the onboard staff it needs for its Blackpool hub.