HITACHI Rail and British rolling stock leasing company Eversholt Rail have signed a Memorandum of Understanding (MoU) to jointly develop a battery pack that can be installed on a five-car class 802 inter-city train operated by Great Western Railway (GWR) on the 480km journey between London and Penzance in the southwest of England. 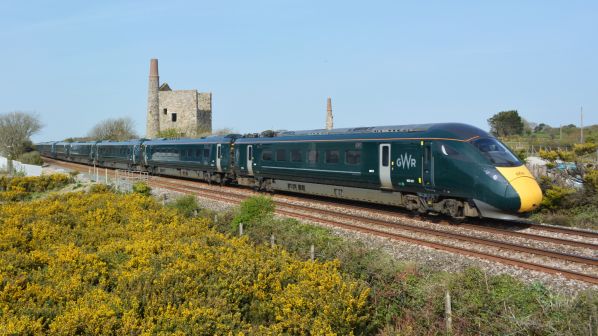 GWR launched the Hitachi class 802 bi-mode trains in August 2018. The fleet, which comprises 22 five-car and 14 nine-car trains, operates under 25kV ac electrification on the the 85km section between London Paddington and Newbury, and on diesel power beyond there to Exeter, Paignton, Plymouth and Penzance.

Under the agreement, Hitachi and Eversholt Rail will replace one of the under-floor diesel engines on a five-car train with a battery, creating a tri-mode hybrid train. This is expected to result in fuel savings of up to 20%.

The train will be able to operate solely on battery power when entering and leaving the 15 non-electrified stations on the route, reducing pollution and noise. The battery will be able to recharge while operating under electrification, or within 10 to 15 minutes while static.

The trial will demonstrate that the innovation meets passenger service and safety standards.

Hitachi will draw on its own expertise developed in Japan, as well as working with Sunderland-based Hyperdrive Innovation, which Hitachi signed an agreement with in July to create and develop battery packs for mass production at Hyperdrive’s HYVE facility.

Hitachi and Eversholt Rail say projected improvements in battery technology, particularly in power output and charging, could allow more diesel engines to be replaced incrementally, with a fully electric-battery inter-city train capable of travelling the full 191km between London and Penzance possible by the late 2040s.