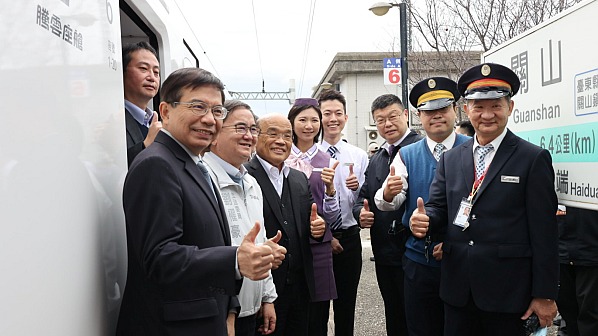 The first Hitachi EMU3000 was launched on December 26.
Photo Credit: Taiwan Ministry of Transportation and Communications

The first three 150km/h 25kV 60Hz EMUs were due to enter traffic by the end of 2021 on the island’s East Coast line, with two more to follow by this year’s Spring Festival.

Minister of transport, Mr Wang Guocai, says the EMU3000s increase capacity by 40%. The first train arrived in Taiwan from Japan on July 30 last year after TRA placed the $NT 44.3bn ($US 1.59bn) order in January 2019. Seven trains have now been delivered and they are a key part of the 2015-2024 Train Procurement and Renewal Plan.

TRA received a safety certificate to operate the train on December 21 from TRA, Hitachi and TÜV Rhineland Taiwan.