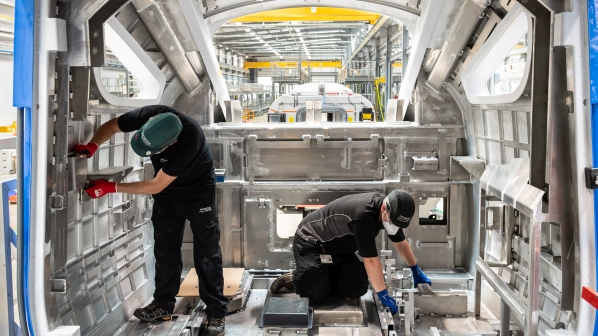 The fleet will be completed from empty aluminium shells.

The construction of the new inter-city trains involves more extensive manufacturing than previous work at the Newton Aycliffe factory, which opened in 2015, with staff completing the work from empty aluminium shells.

East Coast Trains, a subsidiary of First Group, will use the trains for a new Edinburgh - London service due to begin operation in autumn 2021. The service between the capitals will be the first departure of the day, which East Coast Trains says provides a strong alternative to flying.

Hitachi is due to invest £8.5m in coach welding and painting facilities at the factory, as it prepares to build more inter-city fleets later this year after completing the £5.7bn Inter City Express Programme (IEP).

The increase in capability will allow Newton Aycliffe to become a full-scope manufacturing facility, from welding panels through to building complete trains. The site will then be able to deliver a wider range of products from start to finish, including LRVs, metro, commuter and high-speed trains, while undertaking multiple projects at the same time.

“Building these trains signifies a new and exciting chapter for Hitachi Rail’s British factory,” says Mr Ross Nagle, COO rolling stock UK at Hitachi Rail. “It is an important step as we increase our manufacturing capabilities and upskill our workforce at Newton Aycliffe.

“The increased skills of our workforce makes us well placed to deliver a number of highly significant orders over the next 12 months, and consolidate our place as a strategic North East manufacturing hub.”