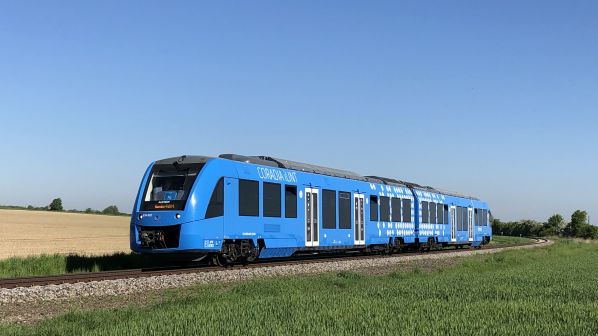 The test run between Bayreuth and Coburg was organised jointly by train operator Agilis, the state’s Ministry of Housing, Construction and Transport and the Bavarian Railway Company (BEG).

Bavaria is looking to switch to alternative forms of traction on diesel-operated lines in the medium to long-term. Under the Bavarian Rail Electromobility Strategy (Bess), which has been approved by the state government, pilot projects will be implemented using different types of alternative traction including batteries and hydrogen fuel cells.

“We want to use more environmentally-friendly traction on Bavarian passenger trains,” says state minister for housing, construction and transport Mr Hans Reichhart. “In addition to electrification, we are pushing ahead with the introduction of hydrogen technology in the railway sector like no other German state. We are investing more than €25m in state funds to support further research into this technology.”

Lower Saxony became the first German state to order hydrogen trains in November 2017, when Lower Saxony Transport Authority (LNVG) awarded Alstom a contract to supply 14 iLints for services around Cuxhaven and Bremerhaven. The prototype trains entered commercial service in September 2018 and the production trains are due to arrivie in 2021.

In May Rhine-Main Transport Authority (RMV) announced an order for 27 iLint sets, which will replace diesel trains in the Taunus region north of Frankfurt from 2022 onward.