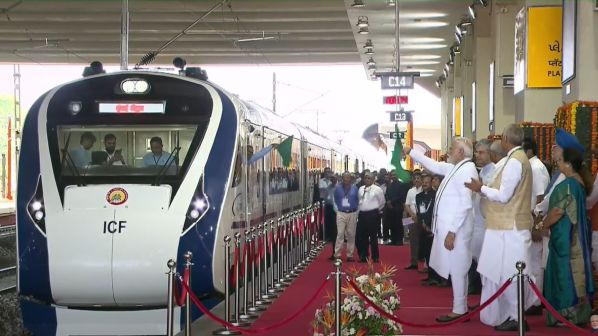 THE Vande Bharat EMU programme will gather pace this month when three contracts are due to be awarded by Indian Railways (IR) for two variants of the 16-car 160km/h train.

The contracts are likely to be divided among the seven prequalified manufacturers: Alstom, Siemens, Titagarh Wagons, Crompton and Greaves, Medha Servo Drives and Bharat Heavy Electrical Limited (BHEL), the only state-owned bidder.

For the first time in India, the manufacturers - referred to as technology partners - will be awarded contracts for complete train manufacture and supply and not just the supply of traction systems as has been the case so far.

The India government will be contractually bound to purchase 400 Vande Bharat EMUs, as announced by finance minister, Ms Nirmala Sitharaman, in her budget speech earlier this year.

As the tender documents state, the Indian government will reimburse the total costs that private companies will incur when installing new equipment at IR production units and workshops. IR will provide the basic structure with electrical systems, cranes, track and catenary, as well as electricity and water free of charge.

IR will also provide manpower, making up 0.5% of the total number of personnel engaged in the Vande Bharat project. IR staff will work under the “supervision and control” of the technology partner, while their wages and allowances will continue to be paid by the government.

The technology partner will conduct training workshops for IR staff, with the costs to be met by their employer.

According to the tender documents, IR will pay an annual maintenance fee to the technology partner at a rate ranging from 3.5% to 10.5% of the total contract value over the next 35 years.

IR will also be required to reimburse the cost of equipping workshops with an inspection bay with a minimum of two to three tracks and a covered workshop bay of the same dimensions. Other new equipment will include a bogie drop table, and facilities for train washing and heavy cleaning.

While the contracts do not appear to hold financial risks for the private-sector manufacturers, they do face the technological challenge of building EMUs for IR’s 1676mm-gauge network. Private companies also risk the abrupt cancellation of contract because of a change in government or other factors.

The tender documents say that the technology partner will manufacture and supply 18 sleeper trains in the first year, 24 trains in the second year and 30 trains from the third year onwards.

A minimum of 30 chair car variants are to be built each year, and India’s Prime Minister, Mr Narendra Modi, has announced plans to have 75 Vande Bharat trains in service by August 2023.