The long-awaited launch of 200km/h inter-city services in the Netherlands has been postponed until the start of the 2024 timetable in December 2023. 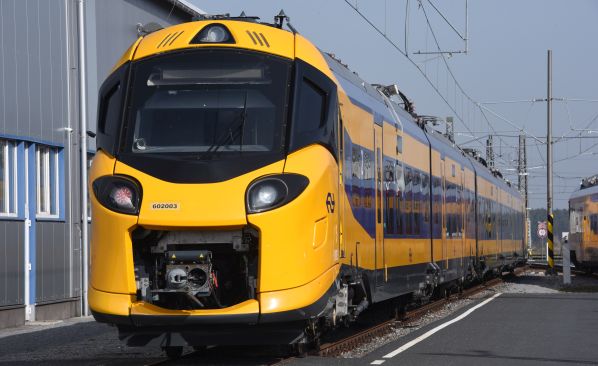 THE introduction of the new Inter-City New Generation (ICNG) 200km/h trains, which Alstom is supplying to Netherlands Railways (NS), has been delayed until December 2023. The delay means that NS will have to postpone a major change to its timetable and inter-city route network.

A knock-on effect of the delay is that NS will not be able to introduce 200km/h services as planned on the important Breda - Rotterdam - Schiphol Airport - Amsterdam South - Zwolle - Groningen/Leeuwarden inter-city route which includes the HSL South high-speed line and the 200km/h Hanze Line. Another casualty of the delay is the postponement of the planned Amsterdam Central - Schiphol Airport high-frequency Sprinter service and the diversion of all inter-city services from this line to Amsterdam South, which would become the main station for Amsterdam.

Mr Steven van Weyenberg, secretary of state at the Ministry of Infrastructure, has decided not to impose a fine on NS as the delay is considered force majeure, despite NS’ violation of the terms and conditions under its directly-awarded 2015-2025 concession to operate the core passenger network.

The introduction of the ICNG fleet at the start of the 2021 timetable year was one of the conditions included in the concession agreement, with trains operating at 160km/h initially and increasing to 200km/h on HSL South one year later.

The delay means that the existing Dutch inter-city and Amsterdam - Brussels services running on HSL South will continue to be operated by 160km/h Traxx MS2 multi-system locomotives with modernised ICRm coaches dating from the 1980s. However, it might be possible to introduce the first ICNG trains on IC Direct services between Breda, Rotterdam, Schiphol airport and Amsterdam Centraal in 2023.

The delay to the delivery of the trains is blamed on difficult working conditions cause by the Coronavirus pandemic and problems developing the onboard software for ICNG. There are also the ramifications from the derailment of two ICNG five-car EMUs in Dreileben-Drackenstedt, Germany, on October 16 2020. The braking system is being modified following the derailment.