Irish Rail seeks up to 600 electric and battery-electric vehicles

IRISH Rail (IE) has published a notice in the Official Journal of the European Union and eTenders seeking expressions of interest for a contract to supply up to 600 electric and battery-electric vehicles over 10 years for use as multiple units on commuter services. 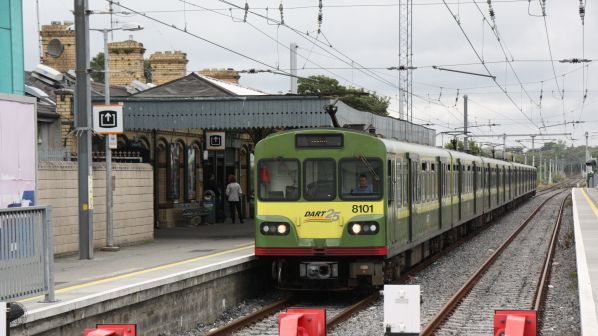 The new trains will expand and replace the Dublin Area Rapid Transit (Dart) fleet of 76 trains, which will be nearly 45-years-old at the end of the current National Development plan in 2027. The contract will also provide a framework for further orders if demand warrants and will include a technical service and spare part supply agreement of up to 15 years.

The procurement is supported by Ireland’s National Transport Agency (NTA). IE says the tender is expected to attract the interest of virtually every major train manufacturer such is the scale of the order, which it describes as the largest and greenest fleet order in Irish public transport history.

The trains will be compatible with the 1600mm-gauge Dart network and 1.6kV dc overhead electrification which is set to expanded on the lines to Maynoonth, M3 Parkway, Hazelhatch and Drogheda under the Dart Expansion plan, which is part of Project Ireland 2040. The trains will operate in complete and half configuration, with a full length of 160-168m.

IE says the majority of the order will consist of electric rolling stock. However, it says a provision for battery-electric trains will meet surging demand should electrification be pushed back beyond 2024. As well as boosting the Dart fleet capacity, the order will free up Dart DMUs for use on long-distance services.

“The procurement of this fleet is the first step in the delivery of Dart Expansion, a programme that will attract some €2bn in NTA funding in the coming decades,” says Ms Anne Graham, NTA CEO. “The recent Oireachtas Climate Action Committee report recommended that the public transport elements of Project Ireland 2040 be prioritised.

“The Committee called for the speedy delivery of public transport investment to encourage more people to choose sustainable modes and leave the car behind.  Today’s announcement represents a significant step in that direction.”

In addition, IE and NTA are progressing with shorter term options to boost fleet capacity and meet record demand on IE’s network - the network carried 47.9 million passengers in 2018.

IE is currently negotiating with suppliers to agree an order for 41 extra inter-city coaches, which will supplement the existing fleet of 234 vehicles from late 2021. NTA is also currently tendering for the possible purchase or lease of used trains, which will require modification for operation on Ireland’s network.