Dawlish: Infrastructure manager Network Rail (NR) has competed the first 360m section of a new sea wall at Dawlish on the Exeter - Plymouth line, with work finished in time to allow the reopening of the beach and promenade for the peak tourism season. 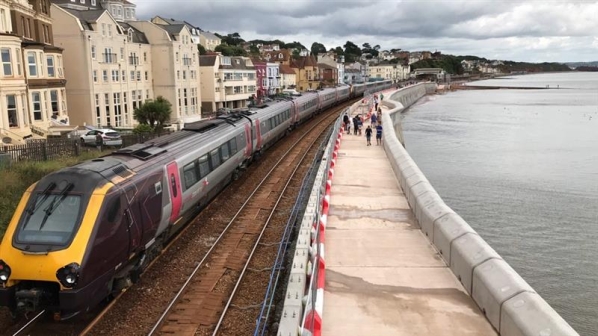 Construction of the sea wall with a curved top to deflect the waves began in May 2019, following the government’s decision to allocate £80m to a new sea wall stretching from Coastguards breakwater to Boat Cove, after storms in 2014 closed the line for eight weeks.

NR has submitted plans for the second section of the wall, a 415m stretch between Coastguards and Colonnade breakwaters, to Teignbridge District Council. Work is expected to start later this year, if approved. The plans include a new, high-level promenade and an accessible footbridge with lifts for Dawlish station.

Wales: Plans for a Global Centre of Rail Excellence testing centre in southwest Wales have progressed, with the submission of an outline business case.

On July 27 and 28, Powys County council and Neath Port Talbot council approved consent for the earthworks for the centre, which will be built at the mothballed opencast mine at Nant Helen and the nearby coal washery site at Onllwyn. The approval follows the Welsh government’s submission of the outline business case to the British government earlier this month, which set out the delivery programme and next steps.

The centre will be a world-leading facility for research, development and testing of rail technology, and will include:

The planned three-stage construction programme would see Phase 1 operational by 2023, and the site fully complete by 2025.

This follows Hampshire County Council’s submission to the Department for Transport’s (DfT) ‘restoring your railway fund,’ which would allow the council to carry out a feasibility study into reopening the line for passenger services.

Onboard the service was British rail minister, Mr Chris Heaton-Harris, NR chairman, Sir Peter Hendy, and representatives from Hampshire County Council and Southampton City Council, along with Mr Nick Farthing, the chair of Three Rivers Community Rail Partnership, who campaigned for the opening of the line.

The new class 745/0 inter-city trains entered service in January, following the introduction of the class 755 bi-mode multiple units in July 2019.

“All 38 bi-mode regional trains and 10 electric inter-city trains are already in passenger service,” says Mr Ian McConnell, Greater Anglia franchise and programmes director. “Over the next six to nine months we will replace all the current trains on the Stansted Express services with new trains, as part of our phased programme for bringing our new trains into service.

“As we do so, we will be able to progressively transfer the current Stansted Express trains on to other West Anglia services, enabling some of the older trains to be withdrawn from service.”

Service resumption: London Northwestern Railway (LNR) will resume services on the Abbey line, between Watford Junction and St Albans Abbey, and the Marston Vale line, between Bedford and Bletchley, from next month.

Services on the lines were suspended in March due to the impact of coronavirus on staff availability and low passenger numbers, with rail replacement buses running ever since.

LNR says increased staff availability and passenger numbers have now allowed the reintroduction of a limited number of services on both lines from August 24, with an aim towards restoring more services by the end of the year.