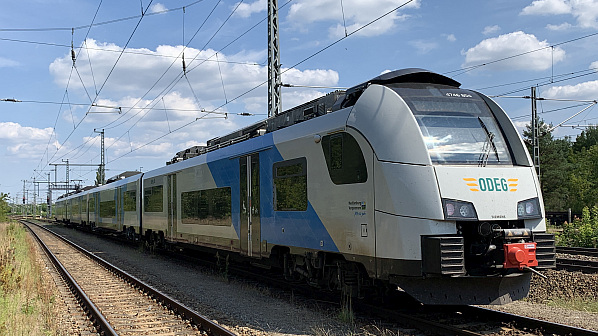 Germany: Siemens Desiro Mainline EMUs operated in Mecklenburg-Western Pomerania by East German Railway (ODEG) are the first in Europe to receive approval to be expanded from three-car to four-car trains. The trains are owned by Alpha Trains. According to specifications in the EU’s Fourth Railway Package, the expansion required approval from the European Union Agency for Railways (ERA) with involvement from the national supervisory authorities. Seven three-car Desiro MLs were ordered in 2018 for ODEG to operate on the Baltic Sea Coast-East network part II. They are currently in operation on Line RE9 between Rostock - Stralsund-Binz/Sassnitz and Line RE10 Rostock - Stralsund - Züssow.

Italy: The first ETR 522 Caravaggio EMU has been released by Hitachi Rail from its Reggio Calabria plant for testing. It will be operated by Trenord in the Lombardy region. Hitachi is building 70 ETR 522 trains.

Britain: The delayed introduction of Alstom class 720s onto the West Anglia main line finally began on August 25, more than two years after they were first due to enter traffic on the line.  Greater Anglia (GA) ordered 133 EMUs from Bombardier in 2016, but the first only entered service with GA on other routes in November 2020 instead of March 2019 as planned. GA has yet to accept a quarter of the order.

Belgium: The first M7bmx double-deck power car made its debut in passenger service on August 23 between Gent and Schaarbeek, after the European Union Agency for Railways (ERA) granted approval in July. The power car can operate using 3kV dc or 25kV 50Hz ac power systems. It has a 200km/h maximum speed. The contract for the trains was awarded to Bombardier Transportation in December 2015 with Belgian National Railways (SNCB) signing a framework contract for up to 1362 double-deck M7 coaches worth €3.3bn.

Poland: PKP Intercity plans to lease two SU42 diesel locomotives for 10 months. These single-cab locomotives have a 90km/h maximum speed and were built between 1967 and 1972. The tender notice issue for their lease doesn’t state what they will be used for.

Lithuania: A call for tender has been issued for electric locomotives, with a long-term supply of spares, by Lithuanian Railways (LTG). The call, issued on August 16, does not specify how many locomotives are needed.

Germany: Hamburg Hochbahn has called for expressions of interested to modernise seven dual-power locomotives under an €11m contract that will keep them in traffic for at least 20 years. This will involve the modernisation of drive control systems, traction inverters, on-board network and auxiliary converters, electronic brake control, electric lines of the power electronics and signalling technology. The contract is expected to take five years to complete. The deadline for interested parties to register is September 20.