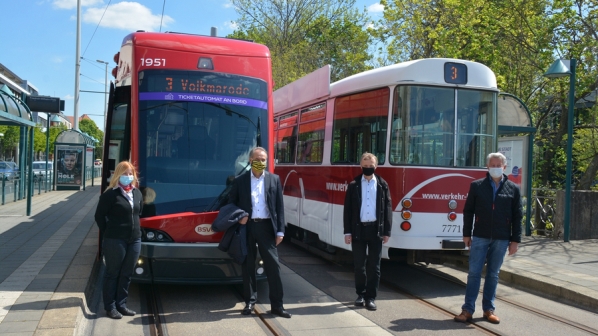 The Tramino low-floor LRVs will replace the legacy fleet, which has been operating since between 1977 and 1981.

Braunschweig Transport (BSVAG) awarded the joint venture a €18.9m contract in June 2017 to supply 17 Tramino low-floor LRVs to replace its legacy fleet, which came into service between 1977 and 1981.

The Tramino II features more than 180 improvements compared with the Tramino I, which was introduced on the Braunschweig network in 2015, including larger double seats, a second wheelchair space and brighter windows. The trains can seat 80 passengers, with room for 125 standing passengers.

Czech Republic: Ingeteam has been awarded a contract to design and supply traction equipment for seven multi-voltage (3kV dc/25kV 16.7Hz ac) EMUs being manufactured by Pesa for Regiojet for operation in the Ústí nad Labem area of Northern Bohemia.

The 53m-long vehicles will have a maximum speed of 160km/h and capacity for 110 passengers.

Ingeteam will supply 14 traction converters based on the Ingetrac medium power solution, which will be installed on the vehicle’s roof, along with auxiliary equipment. The system is designed to optimise the converter's modular design, maximising energy efficiency while minimising the required space. New diagnosis tools will also be included to improve maintenance.

The 30-tonne locomotives are equipped with lithium-ion batteries for catenary-free operation, enabling the elimination of diesel operation during engineering possessions and on non-electrified sidings.

The seven new shunters will eventually be distributed among the stations of Landquart, Untervaz-Trimmis, Chur, Ilanz, Thusis, Davos Platz, and Zernez.

Under the terms of the agreement, Nexans will supply Alstom with tens of thousands of kilometres of cabling each year, ranging from high voltage cables for overhead electrification and power distribution to control and data cables for sensors.

Nexans says, each metre of a modern train typically contains 1km of cables with demand increasing due to greater use of passenger information and equipment monitoring systems. Nexans is designing new types of communication cables for Alstom, including Ethernet cables for faster data transmission and low loss coaxial cables for antenna.