Germany: DB Regio will begin operating services in the state of Bavaria using six Škoda double-deck push-pull trains from November 12. Following testing on the Munich - Ingolstadt -Treuchtlingen line that is due to begin on November 16, they will enter service from December 13 on Nuremberg - Munich Express regional services. 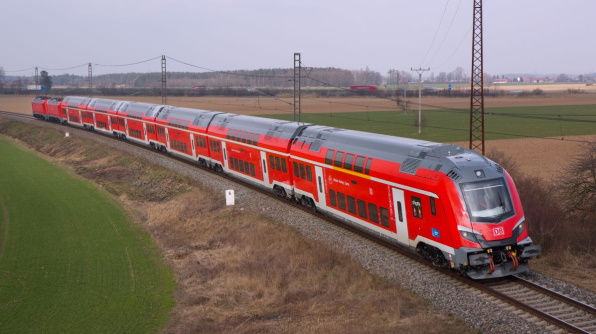 The trains were ordered in 2013 at a cost of €110m and were originally due to enter service in December 2016. However, approval by the Federal Railway Authority (EBA) was delayed due to concerns about reliability.

The 189km/h six-car trains have seats for 676 passengers, compared with 413 in the older trains they replace. They will operate using Škoda 109E3 15kV ac electric locomotives.

Russia: The city of Perm will hold an auction on November 23 for the supply of 15 single-section LRVs. The starting price for the auction is Roubles 705m ($US 9.19m). Under the contract, the first six vehicles should be delivered before the end of the year, with the remaining nine vehicles delivered by March 1 2021. The trams must have a capacity for at least 110 people and be equipped with security cameras, audio-visual information systems, and low-floor areas for people with limited mobility.

Israel: Siemens has shipped the first two of 24 Desiro HC double-deck EMUs ordered by Israel Railways (IR), with the new trains expected to arrive in Israel towards the end of November. The trains are scheduled to enter service on the HaSharon Circle Line between Tel-Aviv and Rosh Ha-Ayin, which is currently being electrified, and the Tel-Aviv - Ashqelon line. The fleet will be maintained by Siemens for 15 years in a new purpose-built depot.

The order comprises six four-car and 18 six-car units under a €900m framework contract signed in March 2018 for up to 60 sets.

Uganda: Uganda Railways Corporation (URC) has announced plans to purchase four new locomotives in January to address the rising demand for rail freight since the Covid-19 pandemic, which caused severe congestion for road freight at international border crossings. The new locomotives will increase capacity from 20,000 tonnes currently to 45,000 tonnes by the end of 2021. The announcement is part of a series of improvements to Uganda’s rail freight capacity, which also includes the €34.6m refurbishment of the Tororo - Gulu line, which is intended to improve connections to Kenya and South Sudan, Uganda’s two biggest export markets.

Germany: Siemens Mobility received approval for its Vectron Dual Mode locomotive from the Federal Railway Authority (EBA) on October 29. The certification enables operators such as Railsystems RP, Minden Museum Railway (MKB), and Stern & Haffer to begin operating services with the locomotives. A fleet of dual mode locomotives ordered by DB Cargo in September will also benefit from the authorisation. The standard-gauge locomotive is designed to operate at 15kV ac and has a top speed of 160km/h.

Bulgaria: Sofia Metro has exercised an option from a contract with Metrovagonmash (MVM), a Transmashholding (TMH) subsidiary, for the overhaul and modernisation of trains operating on its network. Initially, MVM will modernise 12 81-717.4/714.4 series cars, comprising three four-car metro trains. The option includes the repair of up to 40 cars. The overhaul will increase safety and comfort and is expected to extend the vehicles’ service life by around 15 years.

MVM previously overhauled eight metro cars comprising two four-car trains under the contract, which were returned to operation in early 2020.

Czech Republic: Czech Railways (ČD) has awarded a Koruna 270m ($US 12m) contract to ŽOS Zvolen, Slovakia, to carry out a complete modernisation of 12 class 646 DMUs manufactured by Stadler Pankow, which will be used to operate services in the Olomouc region from the second half of 2021.

Russia: The city of St Petersburg has awarded PK Transport Systems, a subsidiary of TMH, a contract to deliver 13 LRVs by March 2021, which will be leased through the government’s Safe and High-Quality Roads National Project. The order includes 11 two-section 71-923M Bogatyr M LRVs and two three-section 71-931M Vityaz M LRVs.

Germany: The first of 50 LRVs modernised by Voith with new electric traction inverters for Stuttgart Tramways (SSB), Baden-Württemberg, has been commissioned. Work on the remaining S-DT 8.10 and S-DT 8.11 series trams is expected to be completed by the end of 2025.

The modernisation includes mechanical refurbishment of the housings, switching elements, braking resistors and chokes as well as the replacement of the power electronics.

Ukraine: Ukrainian Railways (UZ) has completed a Hryvnias 23m ($US 819,350) overhaul of two coaches in its fleet, extending their service life by around 14 years. UZ carried out the work at its Kakhovka depot and plans to modernise a further three coaches before the end of the year and refurbish the interiors of a further 24. The upgrades include air- conditioning, new windows with blinds and an eco-friendly toilet.

Russia: MVM has delivered three RA-3 Orlan DMUs to the Sakhalin branch of the Far Eastern Railway under a contract signed at the end of September. The delivery includes two three-car Orlans with capacity for 134 passengers, and a two-car set with capacity for 78.