The restrictions have been criticised by the CEO of Rail Cargo Group. 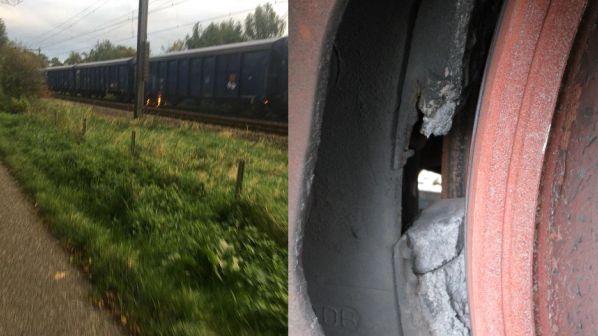 A photo released by ANSFISA showing the issues with the brakes.
Photo Credit: ANSFISA

ITALY’s National Agency for Rail, Road and Motorway Safety (ANSFISA) has introduced an urgent speed restriction from November 9 for all freight wagons equipped with LL blocks (IB 116*), also known as silent brakes, after 29 incidents were recorded across the country over the past two years.

The decision reduces the permitted speed for the wagons carrying general freight from 120km/h to 80km/h, and to 60km/h for trains carrying dangerous goods.

The fixed brake block events were mainly caused by malfunctions to the continuous automatic brake. This increased the temperature of the fixed wheels, and the brake blocks were burned, affecting the wheel tread and starting fires.

On average, events occurred around 95km from departure and around 100km from the point of the last brake check carried out by the train crew. Emergency brakes intervened during the running in five cases around 60km from the point of brake block detection. In one case the fixed brake block caused the derailment of one wagon, resulting in damage to wheelsets and brake components.

The notification says the risk of derailments and fires due to fixed organic LL brake blocks is very high, especially if a train with dangerous goods is involved in the event.

But the CEO of Austrian Federal Railways (ÖBB) subsidiary Rail Cargo Group (RCG), Mr Clemens Först, hit back at the restrictions on Twitter.

“To all of you passionate about rail freight: I am sincerely shocked and deeply sad about a recent development in Italy leading to severe restrictions for trains equipped with (most) silent brakes that will lead to quality issues for rail customers,” he says. “This is - once again - a complete failure of the European rail system.”

In a series of tweets, which he described as a short and “a bit emotional” breakdown of the situation, Först said Germany and Switzerland had forced the sector into “a hasty adoption of silent brakes” ahead of the European roadmap, while ignoring concerns from countries such as Sweden about safety issues in winter conditions. Först says European Institutions were powerless and ignored during this process. He said complying with this requirement resulted in millions of euros required to retrofit and the higher operational costs were incurred.

“Now Italy imposes severe restrictions for trains equipped with silent brakes within a couple of days’ notice and apparently, we have to be happy that silent brakes were not outright forbidden - again [with] no European alignment or relevance of European Institutions in this process,” he concluded.

RCG said that while its logistics experts have taken all possible measures in advance, delays could still occur for its TransFER connections.

“We have been working hard for quiet and sustainable freight transport,” the operator says in a statement. “We therefore deeply regret the decision of the Italian authorities. Rest assured, however: we are working at full speed to guarantee the ongoing flow of goods and to ensure that your shipments reach their destination on time. What is more, we are joining forces with our partners and raising our voice in European committees. This is our responsibility. Together for the entire sector.”