ITALIAN State Railways (FS) and the regional government in Puglia have officially unveiled the fleet of three new Jazz EMUs purchased for regional services such as Bari - Foggia/Taranto and Bari - Lecce. 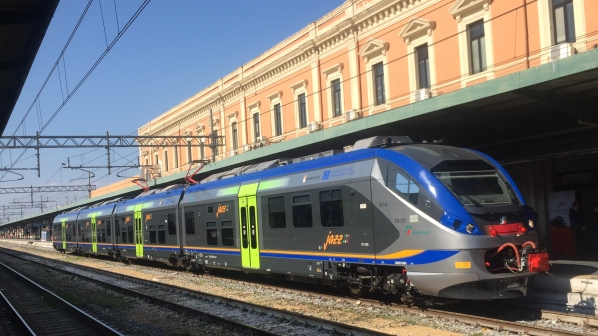 The fleet was unveiled at a ceremony in Bari.

The new trains will operate a portion of these services, with the remaining services continuing to operate with Bombardier-built class 464 locomotives and push-pull trains of various types.

The three ETR324 four-car articulated EMUs built by Alstom at its facility in Savigliano have been largely funded by the European Union (EU), with the regional operational programme of the European Regional Development Fund providing funding for two of the three trains.

The Puglia region will also receive 43 of the new ETR104 four-car Pop EMUs also on order from Alstom, with the full order due in service by the end of 2024.

These trains were ordered in the context of a new long-term operating contract which runs to 2032 and was agreed between the Puglia region and Trenitalia in 2018.

Trenitalia is largely financing the Pop fleet. The operator is funding the procurement of 22 trains directly, while the regional government is financing 60% of the value of the remaining 21 sets. Regional contributions for rolling stock totals €123.5m.

Trenitalia signed a framework contract with Alstom in August 2016 for up to 150 of the 160km/h single-deck trains, which are based on Alstom’s Coradia Stream platform.

For detailed information on fleet orders in Europe and around the world, subscribe to IRJ Pro.