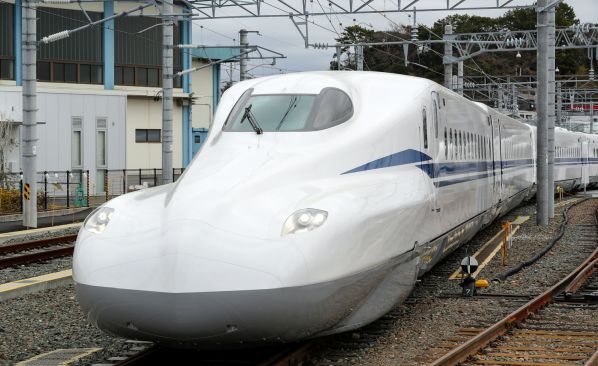 JR Central will introduce the first of its next-generation N700S Shinkansen trains into revenue service on July 1.

JR Central says the 285km/h 16-car train is the first in the world to use silicon carbide (SiC) devices in the traction system. SiC devices have a lower power loss, higher frequency and a higher current than Si devices.

The width of the convertor system for N700S is half that of the conventional system used in series N700 trains, while the axial length of the six-pole traction motor for N700S is 10% shorter. The main transformer’s weight is reduced by applying a new cooling system rather than SiC applications. As a result, the N700S traction system weighs 20% less than the series N700 traction system.

The weight-to-power ratio of the six-pole motor for N700S is 20% less than on previous trains, which have conventional four-pole motors.

The N700S also has a lithium-ion battery self-propulsion system allowing it to operate catenary-free at low speed in the event of an earthquake or power cut.

The N700S has been developed by Fuji Electric, Hitachi, Mitsubishi Electric, and Toshiba Infrastructure Systems & Solutions. The first 12 N700S trains are being supplied this year, followed by 14 in 2021 and another 14 in 2022.

A full technical description of the N700S appeared in the December 2018 issue of IRJ.