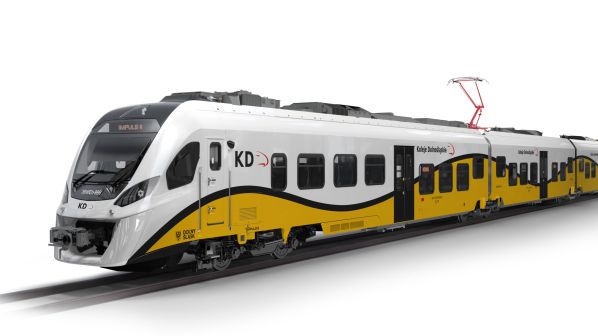 The exercising of the option, which was awarded to Newag after the manufacturer emerged as the sole bidder for the contract, brings the total value of the order to Zlotys 170m ($US 44.37m).

The contract was awarded through a tender announced in February. Newag’s bid for the tender was initially rejected by KD on the basis that the price was 44% above its original budget of Zlotys 118m, with the contract later being renegotiated to cover an initial order of two trains and an option for up to six more. However, KD’s exercising of the option bring the cost of the order in line with the one outlined in the initial bid.

The first three trains are expected to be delivered within 18 months, and enter service on KD’s network in mid-2022. However, Newag president Mr Zbigniew Konieczek says that “we will do everything to ensure that the entire order of six trains reaches KD by the end of 2021.”

The three-section trains will have a top speed of 160km/h using electric traction, and 120km/h in diesel mode, and will have capacity for 315 passengers. The trains are also designed to offer improved accessibility for passengers with poor mobility, and will feature air conditioning and wireless internet in all coaches.

The new trains will be used to operate services on the partially electrified Trzebnica - Wrocław - Sobótka - Świdnica line. The 60km core section of the line, between Wrocław and Świdnica, designated Line 285, is currently undergoing refurbishment to enable the restoration of regular passenger services after 18 years.

The refurbishment, which is estimated to cost around Zlotys 200m, began in September 2019 with an estimated completion date of early 2021. The work involves the total refurbishment of track, bridges and viaducts along the route, as well as the construction of two new passing loops. When completed, the line will enable operation at speeds of up to 100km/h.

The work is being partially funded by the EU’s European Regional Development Fund (ERDF) under the Regional Operational Programme of the Lower Silesia 2014-2020.

The combination of line refurbishments and new trains is expected to significantly improve transport options for residents of the province of Lower Silesia and improve the region’s attractiveness to tourists.

“Thanks to this investment, the residents of Sobótka and Świdnica, among other places, will be able to easily and conveniently travel to the capital of the province,” says Mr Tymoteusz Myrda, a member of the board for Lower Silesia. “Our goal is to make it as easy as possible for Lower Silesians to reach their work and study places, and cultural and recreational centres.”

The new Impuls II trains will join a fleet of 27 fully electric Impuls I trains currently used by KD, and also follows the order of for five five-section Elf 2 EMUs from Pesa in September.

The 11 new trains will be partially funded through an agreement with the Centre for EU Transport Projects worth Zlotys 85m.