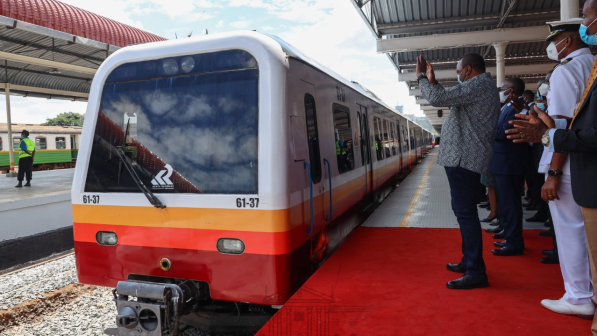 The new DMUs will increase the speed of commuter services from 20km/h to 50km/h.
Photo Credit: Nairobi Metropolitan Services

The trains will be used to expand capacity on the four commuter lines which radiate from Nairobi’s Central Business District to Syokimau, Ruiru, Embakasi and Kikuyu.

The trains are part of a fleet of 11 second-hand DMUs acquired by KRC from Mallorcan Railway Services (SFM), under a Shillings 1.5bn ($US 13.76m) agreement signed in March 2019.

The trains were originally built by CAF between 1995 and 2003, and were sold by SFM following the completion of electrification of the Mallorcan network.

The trains were purchased as part of the Nairobi Commuter Rail Service (NCRS) project, which aims to modernise and expand the city’s under-utilised commuter rail infrastructure to reduce congestion on roads and create an efficient and affordable mass rapid transit system.

The project includes upgrades to existing stations, rolling stock, signalling systems and around 100km of track, as well as the construction of new stations in Buru Buru, Pipeline, Umoja, Githurai, Donholm.

The project will be carried out in three phases:

During the visit to Nairobi Central, Kenyatta also inaugurated a new customs facility at KRC’s Bomaline freight depot, which is intended to deal with small consignments and will reduce congestion at the Nairobi Inland Container Depot where freight is transferred to the 729km Mombasa - Nairobi - Naivasha Standard Gauge Railway (SGR).