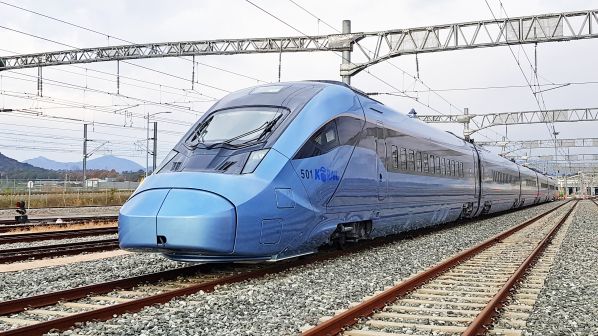 Five of the new EMU-250 trains entered service on January 5.

The five six-car trains, designated as ‘KTX-Eum’ (KTX-Connect) by Korail, are the first distributed-traction high-speed trains to operate in Korea. Korail previously only operated high-speed trains with power cars at each end, such as KTX-Sancheon.

The launch of services using the new trains follows a successful trial run on the line between Wonju and Jecheon on January 4, which was attended by Korean president, Mr Moon Jae-in, and other government officials.

The EMU-250 is based on the HEMU-430X, a 430km/h prototype developed by Hyundai Rotem in 2012. The new trains are expected to offer improved acceleration and deceleration compared with older models operated by Korail, reducing braking distances and improving management of curves. The trains are also expected to offer improved energy efficiency and reduced wind resistance.

The new trains have a seating capacity of 381, 18 more than KTX-Sancheon, and feature double gangways between coaches, limiting the impact of noise on passengers. The trains are also equipped with passenger entertainment systems, Wi-Fi and charging sockets. Accessibility is enhanced by access ramps at doors.

Delivery of the trains began in November 2019, under a Won 216bn contract for 84 EMU-250 sets for the Jungang, Centre Island, and Seohae lines awarded in December 2016. The trains were manufactured at Hyundai Rotem’s Changwon site.

Two other contracts are currently being carried out by Hyundai Rotem on behalf of Korail; a Won 102bn contract awarded in May 2016 to supply 30 EMU-250 trains for the Gyeongjeon line, and a contract for the delivery of 21 320km/h distributed-power EMU-320 sets, announced in 2018.