The project has been delayed by the pandemic and travel restrictions affecting contractors. 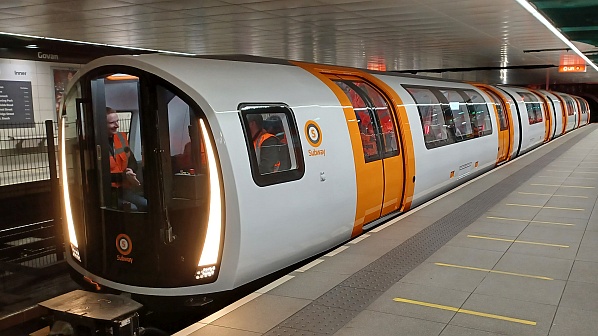 TESTING of the first of 17 four-car driverless Stadler metro trains is underway on the Glasgow Subway.

The 1219mm-gauge Strathclyde Passenger Transport (SPT) trains are equipped for Unattended Train Operation and are being manufactured at Stadler’s Altenrhein plant in eastern Switzerland.

The initial test involved operating a train under its own power from Broomloan depot to Govan station. The second involved testing the ability of shunting locomotives based at the depot to rescue the train. Both tests were described as successful by SPT. The next stage is for intensive testing to begin in early 2022.

SPT subway director, Mr Antony Smith, says the start of testing away from the depot is an indication that the project is moving forward following days caused by Covid-19. The first two trains arrived in Scotland in 2019, while the first train was unveiled at InnoTrans in 2018. Smith says that various lockdowns and travel restrictions for contractors have affected the project.

Previous testing of the trains had been conducted using a 760m-long test track at Broomloan depot.

The trains are part of a £203.2m contract to modernise electrical and mechanical systems on the Subway. In addition to rolling stock, the contract includes installation of CBTC and automation technology, communications systems, a new operational control centre and the Broomloan test track. This is the main element of the £288m Subway Modernisation Programme which also includes the refurbishment of the circular line’s 15 stations as well as track and tunnel upgrades.

The 39.25m-long trains have seating capacity for 118 passengers including 12 tip-up seats and 204 standing passengers. For the first time on the Subway, the new trains will have wheelchair accommodation.

For data on metro projects across Europe, subscribe to IRJ Pro.