A hydrogen train successfully operated on the mainline in Britain for the first time on September 30, with the launch of testing of the HydroFlex train developed by the University of Birmingham and rolling stock leasing company Porterbrook. 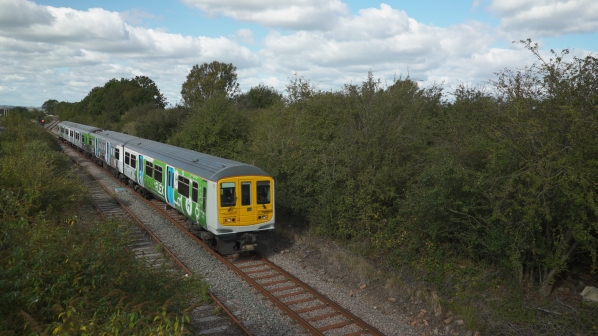 The HydroFlex pilot involves the fitment of a hydrogen powerpack to an existing class 319 EMU, which will eventually allow it to run on conventional electrified and non-electrified routes. The train received approval for mainline testing in June 2019 following a successful proof-of-concept.

The project, which was supported with a £1m investment from the university and Porterbrook along with £750,000 from the Department for Transport (DfT), expects to develop the technology in time to retrofit existing diesel trains in 2023.

Under the next stage of the HydroFlex programme, the University of Birmingham is developing a hydrogen and battery powered module that can be fitted underneath a train, providing more space within the coach.

“Porterbrook is committed to innovation and the delivery of a carbon neutral and sustainable railway,” says Ms Mary Grant, CEO of Porterbrook. “Today’s mainline testing of HydroFlex achieves another important milestone on this journey. I’m also delighted to be able to announce our intention to start producing HydroFlex trains, creating the world’s first electric and hydrogen powered bi-mode rolling stock, as well as generating significant opportunities for the UK supply chain.”

The DfT says it is developing even more ways to slash emissions across transport, as work to create the Transport Decarbonisation Plan continues. The plan will develop a first-of-a-kind approach to decarbonise every mode of transport and is due to be published before the end of this year.

Transport Secretary, Mr Grant Shapps, met with experts from the University of Birmingham’s Birmingham Centre for Railway Research and Education (BCRRE) on September 29 prior to the launch of the test train, and announced that the Tees Valley in northeast England will become a Hydrogen Transport Hub.

Shapps says the hub will bring together representatives from academia, industry and government to accelerate Britain’s plans to embrace the use of hydrogen as an alternative fuel, which could create hundreds of jobs.

“As we continue on our road to a green recovery, we know that to really harness the power of transport to improve our country, and to set a global gold standard, we must truly embed change,” Shapps says.

To kick-start development in Tees Valley, the DfT has commissioned a master plan to understand the feasibility of the hub and how it can accelerate Britain’s hydrogen ambitions. The master plan, expected to be published in January, will pave the way for exploring how green hydrogen could power buses, heavy goods vehicles (HGV), trains, ships and aircraft across Britain. The aim would be for the region to become a global leader in industrial research on hydrogen as a fuel as well as a research and development (R&D) hub for hydrogen transport more generally.

The master plan for the Tees Valley Hydrogen Transport Hub will be developed by London-based engineering consultant Mott Macdonald, and will look to understand user needs and demand across the different forms of transport, to understand what role hydrogen can play in the decarbonisation of transport.

The announcement follows the release of infrastructure manager Network Rail’s interim programme business case for its Traction Decarbonisation Network Strategy (TDNS), developed in response to the government’s plan to achieve net zero greenhouse gas emissions by 2050, which identified hydrogen as a key technology required to decarbonise the network.

An in-depth review of the TDNS will appear in the October issue of IRJ.