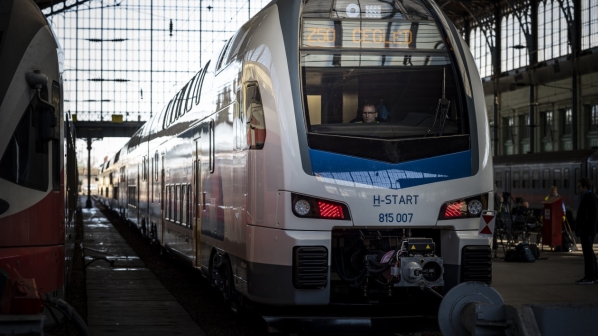 The new fleet is also expected to be introduced on the Budapest Nyugati - Vác - Szob line at the end of April.

MÁV-Start awarded Stadler a framework contract in May 2017 to replace the 40-year-old V43 Sili locomotives and Bhv coaches and initially ordered 11 trains, before exercising two options for eight and 21 trains respectively.

The first 11 trains should be in service by August, including on the suburban lines to Cegléd and Vác. The additional eight EMUs will enter service later this year, with the final 21 entering service by the end of 2022, when all suburban services in Budapest will be operated with new Kiss, Flirt and Desiro vehicles.

“The 40 EMUs purchased with government support cost more than Forints 200bn ($US 653.3m), so that the railway company can offer 24,000 new seats for passengers,” says parliamentary and strategic secretary at the Ministry of Innovation and Technology, Mr Tamás Schanda. “Between 2016 and 2024, around Forints 1800bn will be spent on rail investments that have already been completed, are under construction or are in the pipeline.”

The fleet features local content, with the bogies manufactured in Hungary and Dunakeszi Vehicle Repair assisting with the assembly of the fleet.

The 155.88m-long, 2.8m-wide and 4.6m-high EMUs feature air-conditioning, a passenger information system, four toilets including one equipped for passengers with limited mobility, Wi-Fi, CCTV, and spaces for four wheelchairs, and 12 bikes or five pushchairs.

For more information about rolling stock orders around the world, subscribe to IRJ Pro.