Decommissioned San Diego LRVs are being shipped to Mendoza, Argentina. 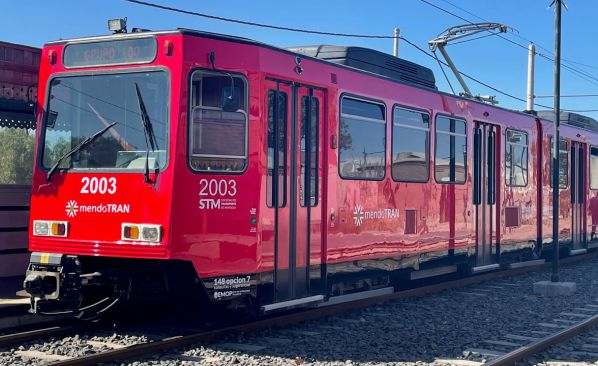 The first of 39 former San Diego LRVs in Mendoza, Argentina.

SAN Diego’s Metropolitan Transit System (MTS) is donating up to 39 decommissioned Siemens SD100 LRVs to Mendoza Transport (STM), Argentina. The first three LRVs have arrived in Argentina, and shipments are expected to continue over the course of the year.

“As MTS modernises its Trolley fleet, we are very glad to see our older [second-generation] models continue to be put to use, serving the people of Mendoza to carry residents to work, school and other activities, just like they’ve been doing in San Diego for almost 30 years,” says Ms Sharon Cooney, CEO of MTS.

The government of the Mendoza is covering all costs associated with the donation and shipping. To make the trip, the LRVs must be dismantled into two pieces and encased in plastic. The LRVs are transported by truck to Long Beach; by ship to Antofagasta, Chile; and by truck across the Andes to Mendoza, where a team of MTS workers will reassemble them. The government plans to send technicians to San Diego soon for maintenance and operations training.

This is the second time MTS is sending LRVs to Mendoza. “Given the compatibly of the city’s light rail infrastructure with San Diego’s LRVs manufactured by Siemens, back in 2012, MTS sold 24 LRVs to Mendoza from its first-generation fleet,” MTS says. These were U2 LRVs built by Duewag in Düsseldorf.

STM operates a single 17.6km light rail line in Mendoza. The line, which opened in 2012, has 25 stations and runs along a former General San Martin Railway corridor.