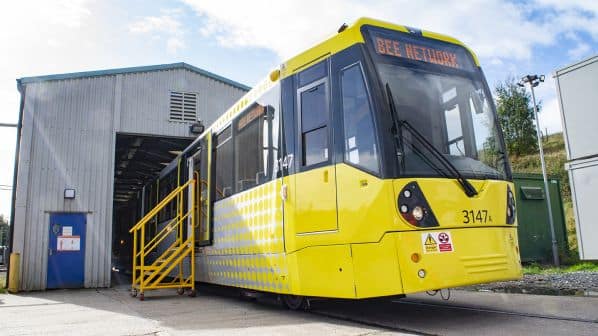 MANCHESTER’S Metrolink light rail network has received the last of 27 new LRVs ordered from Bombardier Transportation UK - now Alstom - and Kiepe Electric by Transport for Greater Manchester (TfGM) in July 2018 as part of a £72m investment in the network.

The last of the new M5000 high-floor LRVs was received by Metrolink operator KeolisAmey Metrolink (KAM) on September 24 and is undergoing testing and commissioning before entering service.

The new LRVs are funded by the British government’s Transforming Cities Fund, which has also helped provide more car parking capacity around the network, as well as extending the Metrolink rolling stock maintenance depots at Old Trafford and Queens Road.

The vehicles, based on Bombardier’s Flexity Swift design, were originally due to be delivered between February 2020 and June 2021. The first LRV was delivered in November 2020.

“It’s really important we attract people onto public transport as we build the Bee Network, and Metrolink is a key part of our plans for a more integrated, ‘London-style’ system,” says Greater Manchester mayor, Mr Andy Burnham. “Metrolink is synonymous with Greater Manchester and, following a decade of investment and growth is now the largest network in the country. We are proud of it, and it shows what can be done when you have local control over something that is run in the interests of the people it serves.

“These new trams represent a further major investment and will provide increased capacity at key growth areas. The more people that use public transport, the more we will ultimately be able to reinvest back into the system and make the Bee Network the first-class public transport system that Greater Manchester needs.”

Metrolink’s fleet of 147 LRVs have collectively covered more than 118 million km, with the new fleet of vehicles approaching 2 million km in service. On average, the LRVs cover 40,000km a day.

“I’m delighted that we’ve now received all 27 new trams which will mean we can boost capacity on the network and attract more people onto Metrolink, as well as other modes of public transport as part of the Bee Network,” says head of Metrolink at TfGM, Mr Danny Vaughan. “Along with investment in our trams, we have also expanded park and ride facilities on the network and are improving cycling facilities at Metrolink stops to support the vision of an integrated public transport system.”