Midland Metro service to resume at the end of May

This is the third time in less than a year that the LRVs were removed from traffic due to faults. 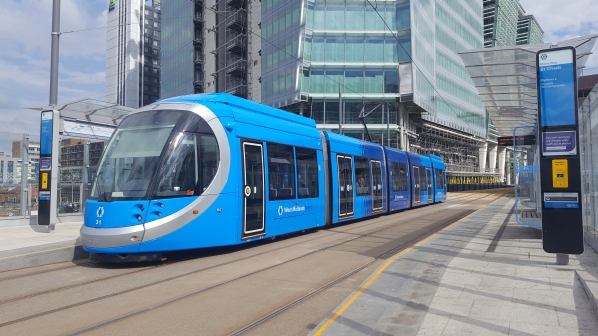 MIDLAND Metro expects to be able to restart passenger services with its fleet of CAF LRVs in Birmingham, Britain, by the end of May 2022.

The service has been suspended since March 20 after cracks were discovered around the doors of the CAF Urbos 3 five-section LRVs. This was the third such instance in nine months, although previous cracks were found in the area above the bogies.

In a statement, Midland Metro says that it has been working with CAF on a detailed assessment of the fleet and that a schedule of work to replace cracked body panels will now be undertaken to return the LRVs to traffic.

The LRVs will be repaired away from the midlands due to expansion work at the operator’s Wednesbury depot. IRJ understands CAF will undertake the work in the Manchester area although Midland Metro has not confirmed this.

Additional engineers from Britain and Spain have been working on the assessment and will carry out the panel replacements.

The decision to replace the panels rather than repair them was made by Midland Metro to ensure the future reliability and robustness of the service.

Testing and commissioning of new CAF Urbos 100 LRVs continues, with a sixth accepted for service from an initial order of eight. The remaining 13 are due to be delivered by the end of 2023. The order was placed in October 2019.

Midland Metro requires 18 LRVs to operate a peak service but has previously operated with a fleet of nine.