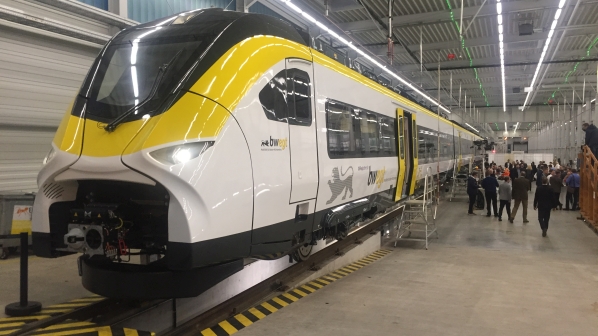 Future operator DB Regio, which will lease the new Mireo trains from Baden-Württemberg’s state-owned train leasing company, and the media were also invited to the event.

The class 463 three-car EMU is the first of 24 sets on order for regional services on the Rhine Valley route between Offenburg and Basel Bad from June 2020.

Siemens launched the Mireo concept in 2016 after two years of development, and the first order - the ‘Rhine Valley’ contract - was announced in January 2017. Siemens has built eight pre-series trains which will be used to gain an Authorisation to Place in Service from the German Federal Railway Authority (EBA) during 2019. Dynamic testing with the first train began at Wildenrath in November.

The Mireo concept was designed to reduce life-cycle, energy and maintenance operating costs as well as lower initial construction compared with similar trains from both Siemens and its competitors.

The train can be supplied in formats varying from two to seven cars and uses articulated vehicles and newly designed SF7500 inside-frame bogies derived from the SF7000 used on Britain’s Desiro City trains. The articulation trailer bogie features axles 2.3 metres apart. Siemens has confirmed that a power bogie version incorporating traction motors is under development which will enable it to offer trains longer than four cars.

Making the Mireo a lighter EMU

By using articulation and longer aluminium body shells, the 70m-long Mireo is 20% lighter than the equivalent-length Siemens Desiro ML train due to the reduction in bogies from six to four. The traction equipment and bogies are also 40% lighter due to the inside-frame design. The weight reduction will result in energy and maintenance cost savings and ensures the train does not breach the 20-tonne maximum axleload for operation on German secondary lines.

The Mireo interior concept from Siemens is “empty tube,” giving customers to greater freedom to configure the layout and interior details. The Rhine Valley Mireo, equipped with onboard CCTV, passenger Wi-Fi and passenger counting technology, has 200 seats and four pairs of doors on each side of the train. A separate order from German Rail (DB) for Mireo units for use on the Rhine-Neckar S-Bahn will have six pairs of doors on each side for use on busy commuter services.

The ‘Rhine Valley’ trains are fitted with inter-vehicle fire resistant doors to meet TSI standards for operating in long tunnels, as the Offenburg - Basel route includes the 9.4km Katzenberg Tunnel which opened in 2012.

Siemens previously announced the development of a hydrogen fuel cell Mireo prototype, Mireo Plus H, in conjunction with fuel cell manufacturer Ballard and the technical university in Aachen, which will appear in 2022. Design work has also been undertaken for a battery EMU version, Mireo Plus B, which will have a catenary-free rang of up to 80km.