The train was developed through the H2goesRail project. 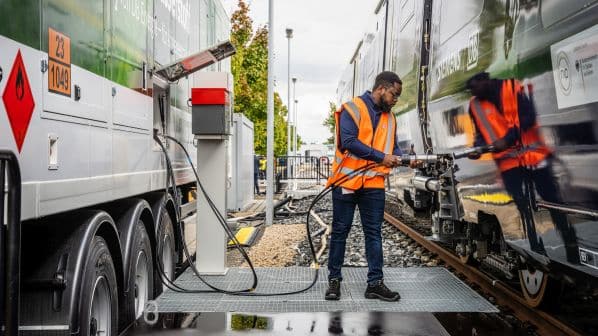 GERMAN Rail (DB) and Siemens began trials of the new Mireo Plus H hydrogen train and its mobile hydrogen refuelling station on September 9.

The premier run of the train at the Siemens Test and Validation Centre in Wegberg-Wildenrath, North Rhine-Westphalia, was attended by Siemens CEO, Dr Roland Busch, DB CEO, Dr Richard Lutz, and state secretary in the Federal Ministry for Digital and Transport (BMDV), Mr Hartmut Höppner.

Siemens Mobility and DB first presented the H2goesRail project in November 2020. In addition to the refuelling and commissioning tests conducted over recent months, DB employees have been trained to operate the system when it enters service.

The Mireo Plus H has a range of up to 800km and is as powerful as its EMU counterpart, having 1.7MW of traction power to provide acceleration of up to 1.1m/s2and a maximum speed of 160km/h. The project is being funded with €13.74m from BMDV as part of the National Innovation Programme for Hydrogen and Fuel Cell Technology.

DB says a key factor in making hydrogen traction viable is the speed of refuelling, and the new mobile method is as fast as refuelling a diesel train. Hydrogen to fuel the trains will be produced in Tübingen by DB Energy using green electricity taken directly from the overhead power line.

On the Tübingen - Pforzheim route, where Mireo Plus H will enter service in 2024, switching from diesel to hydrogen will save around 330 tonnes of CO2 emissions a year. The Mireo Plus H will begin test runs in Baden-Württemberg in 2023.

“We are taking a decisive step with our partners today towards the future of climate-neutral transport,” Busch says. “The new Mireo Plus H train emits nothing but water. Over its service life of 30 years, a single train will save up to 45,000 tonnes of CO2 emissions compared with travel by car.”

“Our goal is clear: we plan for DB to be climate-neutral by 2040,” Lutz says. “And one key lever here is bidding farewell to diesel fuel. With our development of a mobile hydrogen refuelling station and its associated maintenance infrastructure, we at DB are once again showcasing outstanding and innovative drive technologies and demonstrating how the climate-neutral mobility of tomorrow will work.”

Siemens Mobility and Deutsche Bahn will also be showcasing the H2goesRail project and the Mireo Plus H at InnoTrans. An in-depth report on the train also appears in the September issue of IRJ.