HONG Kong’s MTR began operating the first two of its new Phase 5 single-car LRVs on November 17, following the completion of testing and certification. 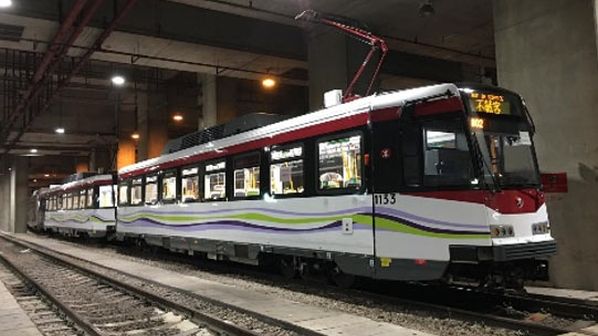 The vehicles have been deployed on the 36.2km Route 610 between Tuen Mun and Yuen Long, and the 11.8km Route 751 between Tin Yat and Yau Oi, in Hong Kong’s northwestern New Territories.

Another Phase 5 LRV is undergoing testing and commissioning following the installation of solar panels on top of the vehicle, as part of a pilot green energy scheme.

MTR received the first two LRVs from CRRC Nanjing Puzhen in December 2018, with the vehicles subsequently undergoing a series of safety and performance tests, and approval by the Hong Kong government’s Electrical and Mechanical Services Department.

The vehicles were originally expected to enter service in 2019, but were subsequently delayed. Delivery of the remaining fleet will be carried out in batches up to 2023.

30 vehicles will replace MTR’s existing Kawasaki Phase 2 LRVs which date from 1992, and the remaining 10 will expand MTR’s LRV fleet to 150 vehicles.

For detailed data on light rail fleet orders from around the world, subscribe to IRJ Pro.