SHORTLY after midnight on January 1, the first of 10 pre-series trains supplied by Siemens and Stadler entered service on the Berlin S-Bahn. 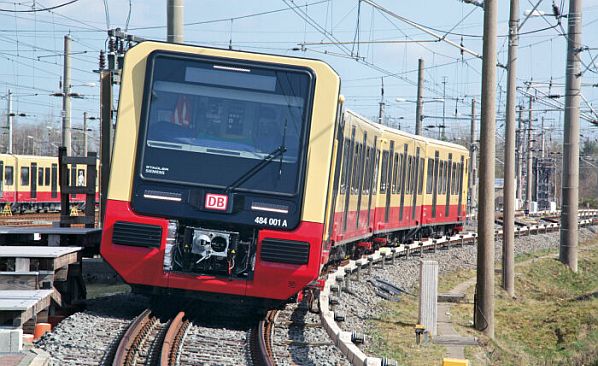 The first of the new series 483/484 trains was introduced on Line S47 between Spindlersfeld and Hermannstrasse. The new trains will also operate on lines S8, S46, and S41/S42.

The pre-series trains will provide additional data and operating experience, which will be applied to the series production trains, which are already under construction. S-Bahn Berlin has ordered 382 cars comprising 21 two-car and 85 four-car sets which are scheduled for delivery by the end of 2023.

“Our passengers can look forward to a completely new travel experience,” says Mr Peter Buchner, CEO of S-Bahn Berlin. “Together with Siemens and Stadler, we have been working towards this moment for five years - we closely accompanied the production, testing and acceptance of the trains and prepared ourselves intensively, including training train drivers and employees in the Grünau workshop on the new trains.”

So far, 114 drivers have been trained to operate the new fleet. The pre-series trains have completed a two-year test programme which included several stages.

The trains were tested at Siemens Mobility’s test track in Wegberg-Wildenrath between autumn 2018 and spring 2020. The tests included measurements and type tests for derailment safety, brake tests to measure braking distances, and tests for electromagnetic compatibility (EMC).

A four-car train underwent a 12-week climate testing programme at the Rail Tec Arsenal (RTA) climate chamber (above) in Vienna, Austria, starting in autumn 2019. The train and passengers were subjected to realistic simulations at temperatures ranging from -25oC with ice and snow to 45oC. The tests involved checking whether the third rail current collection equipment worked in heavy snow and ice, if the doors functioned reliably, and whether the retractable steps operated flawlessly.

The pre-series trains have been tested on the Berlin S-Bahn network since September 2019, completing around 150,000km and operating on every part of the 340km network.

The introduction of the new trains coincides with the start of the Ringbahn S-Bahn concession contract awarded by the states of Berlin and Brandenburg to German Rail (DB) subsidiary S-Bahn Berlin in 2015 that takes effect on January 1.