The trains are the first on the London Underground’s deep tube lines to feature air-conditioning. 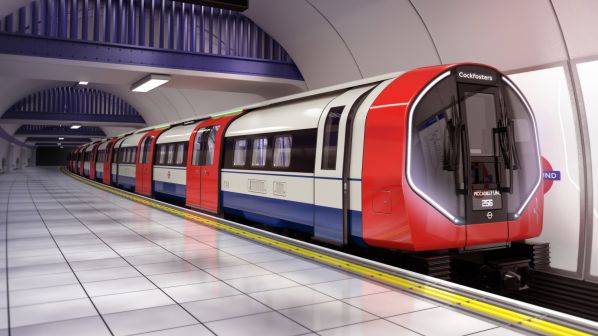 The new Piccadilly Line fleet will be introduced from 2024.

TRANSPORT for London (TfL) and Siemens Mobility have unveiled the detailed designs of the 94 new Inspiro metro trains that will replace the 50-year-old fleet currently operating on London Underground’s (LU) Piccadilly Line.

The new trains are due to enter service from 2025, gradually replacing the legacy fleet. The new fleet has 10% more capacity, as well as allowing the frequency to increase from 24 to 27 trains per hour from mid-2027.

“Creating more space and comfort for a railway that runs through Edwardian age tunnels is a challenge,” says Siemens Mobility UK chief executive, Mr Will Wilson. “These tunnels are smaller than those in other countries, but we’ve actually managed to increase the footprint of the space inside the train.”

The articulated design reduces the number of bogies required, resulting in a lighter train. Combined with regenerative braking, this has resulted in a 20% reduction in energy usage. Maintenance will be improved through the use of smart remote monitoring via Siemens’ Railigent platform.

As well as wider doors and barrier-free access throughout the train, the nine-car trains will be the first on the deep tube lines to feature air-conditioning, along with LED lighting and dynamic passenger information screens. The train design has been developed with regular feedback from TfL’s Independent Disability Advisory Group (IDAG) and the TfL Accessibility Forum.

Siemens was awarded a £1.5bn contract to manufacture the trains in November 2018. Half will be built in Vienna, Austria, and the remaining 47 trains will be manufactured at Siemens’ under-construction facility in Goole, East Yorkshire.

“These much-needed new trains will be a great step forward for our city, improving frequency, reliability and capacity on the Piccadilly line,” says the mayor of London, Mr Sadiq Khan. “The continued modernisation of the Tube - which has seen a transformation over the last two decades - is a key part of my transport strategy to make London a greener, more affordable, more accessible place. But we need investment to continue this work.”

“The introduction of new, desperately-needed modern and reliable trains on the Piccadilly Line, and the capacity they will provide, will be a boost for the capital,” says LU managing director, Mr Andy Lord. “We’re pleased that our investment in new trains is helping the UK economy and assisting with the recovery from the pandemic, and we look forward to seeing them on the network in years to come. Sustained long-term investment would enable us to introduce more modern trains over time to replace other ageing fleets alongside new signalling, improving the journeys of millions more Tube customers and reducing the costs of running the Tube.”

“Subject to securing the necessary funding, it is our intention for the same trains to also serve the Bakerloo, Central and Waterloo & City lines in the future, transforming journeys for millions more of our customers and giving us an underground network truly fit for the 21st century,” Lord says.

As part of its financial sustainability plan, which it is currently discussing with government, TfL is requesting £1.6bn in capital funding per year between 2023 and 2030, to support a new funding model less reliant on fares income.