Authorisation to Place on the Market (Apom) granted. 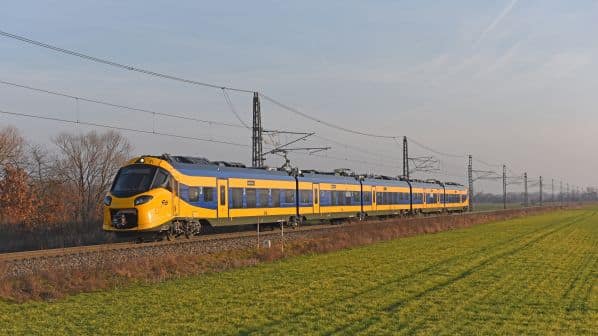 DUTCH rail safety authority ILT has granted the Authorisation to Place on the Market (Apom) that will enable the Intercity New Generation (ICNG) EMU supplied by Alstom to Netherlands Railways (NS) to enter service on the national network.

The Apom was granted on December 30. As the ICNG will operate only within the Netherlands, NS opted to seek approval from ILT rather than the European Union Agency for Railways (ERA).

For domestic operations on the conventional network and the HSL South high-speed line, NS has ordered 49 five-car and 30 eight-car ICNG EMUs, which are 110m and 165m long respectively.

Based on Alstom’s Coradia Stream platform, the ICNG is equipped to take current at 1.5kV dc on the conventional network and at 25kV 50Hz ac on HSL South.

With a maximum speed of 200km/h, it must comply with the Technical Specifications for Interoperability (TSI) for high-speed rolling stock, which apply to all trains operating at over 179km/h.

The new NS fleet has been fitted with ETCS including a specific transmission module (STM) for the Dutch ATB automatic train protection (ATP) system.

The ICNG has been authorised to operate in multiple up to a maximum of three five-car EMUs, one five-car and one eight-car train, or two eight-car EMUs. On certain sections of the national network, restrictions are imposed on operation in multiple so as not to exceed substation capacity.

When operating on the conventional network, the maximum speed is restricted to 160km/h as the ICNG’s dc pantographs do not exert sufficient upward pressure on the overhead contact wire for higher speeds.

On upgraded routes equipped with the first-generation ATB-EG ATP, maximum speed is 160km/h compared with the standard 140km/h. The minimum curve radius that can be negotiated by an ICNG EMU is 150m.

With the December timetable change, NS plans to reshape its Intercity (IC) network and to introduce IC services between Breda and Groningen via Rotterdam Centraal, Amsterdam South, Lelystad and Zwolle.

Drivers and other NS staff are currently being trained on the new ICNG fleet, which will be maintained at the Nedtrain workshops in the Watergraafsmeer stabling yard in Amsterdam.