NETHERLANDS Railways (NS) has begun the process of ordering a new fleet of high-capacity EMUs to replace its existing DDZ fleet, issuing a request for information to select potential suppliers with a view to ordering the new trains in 2022. 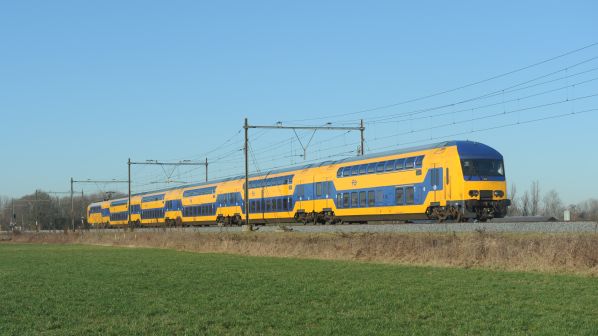 The 150m to 160m-long trains will consist of double-deck and single-deck coaches, which will both increase capacity and improve accessibility.

NS says passenger numbers are expected to exceed the National Market and Capacity Analysis (NMCA) forecasts used by the government in the coming years, which necessitates expansion of the existing fleet.

“We must now also look to the future, in which more and more passengers travel by train,” says NS director - new equipment, Mr Roel Okhuijsen. “Older trains, such as the double-deck DDZ, are approaching the end of their service life. Although we currently have significantly fewer passengers under the influence of the corona measures, we are prepared for growth in the long term.

"Because the purchase of a new train is a process that takes around seven years, NS is choosing to begin the tender today. As usual, a final decision on the trains to be ordered will only be made after the completion of this first phase.”

The order will consist of trains capable of operating at up to 160km/h, with a base order of around 30,000 seats along with options for additional trains to expand this to 80,000 seats by 2036. The order will also include similar trains for cross-border services.

The trains must operate under 1.5kV dc, with an optional requirement to also operate under 3kV dc. The units will be equipped with ETCS and ATB train control systems, and must be compatible with 760mm-high platforms, with barrier-free access to the single-deck coaches.

NS hopes to sign a contract with a supplier in 2022, with a view to introducing the new trains in 2027. The deadline to submit responses to the request for information is June 5.

NS has invested €3.8bn on purchasing new trains and renewing its fleet in recent years. Alstom is currently supplying 99 inter-city trains that are partially destined for the high-speed line, with the first trains expected to be introduced in 2021. CAF is also supplying 206 new Sprinters, with the first 100 already in operation. NS has options for additional trains under both contracts.

For detailed information on new fleet orders from around the world, subscribe to IRJ Pro.