EAST German Railway Company (ODEG) has awarded Siemens a €300m contract to supply 23 Desiro high-capacity EMUs for services on lines RE1, RE8 and RB17 on the Elbe-Spree network. 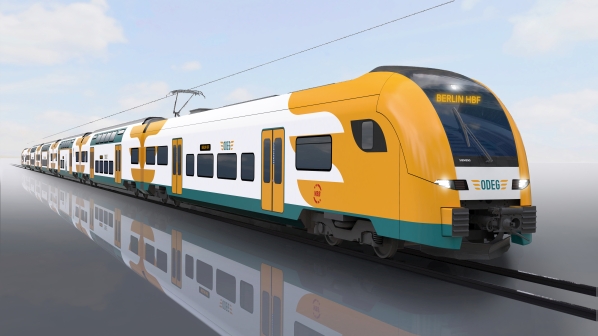 Delivery of the 21 six-car and two four-car trains is scheduled to begin in the summer of 2022.

The order comes after Berlin-Brandenburg Transport Authority (VBB) announced in January that DB Regio and ODEG will share the contracts to operate the network from December 2022 to 2034.

ODEG won the Lot 1 contract for Regional Express Line RE1 (Magdeburg/Brandenburg - Frankfurt an der Oder/Cottbus), as well as Lot 4, which includes four shorter regional routes and the new Line RE8.

Delivery of the 21 six-car and two four-car trains is scheduled to begin in the summer of 2022, with the trains entering service with the December 2022 timetable change. The trains will be built at the Siemens plant in Krefeld, Germany.

The four-car EMUs are planned for service on the RE8 Wismar - Wittenberge -Berlin - Baruth - Elsterwerda/Finsterwalde line, as well as the RB17 Wismar - Ludwigslust line, and will also operate with a 20 minute headway during rush hour. 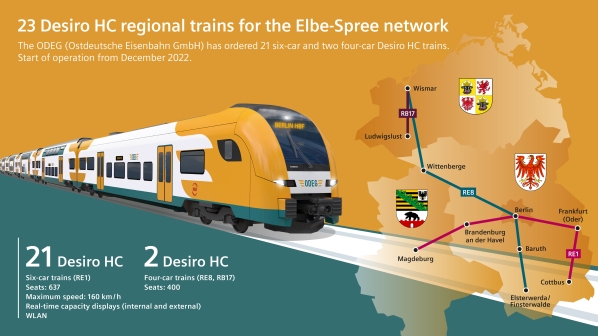 The six-car trains will initially have 637 seats, but the contract includes an option to increase capacity to 800 seats following platform extensions. The four-car trains will have 400 seats.

The trains, which have a maximum speed of 160km/h, will have space for bicycles, pushchairs and wheelchairs and a multipurpose car with an accessible toilet. Sliding steps will enable barrier-free access at stations with 550mm and 760mm-high platforms, while wider doors will speed-up boarding and alighting.

The trains are also equipped with free Wi-Fi, CCTV, and loudspeakers that will allow supervisors at the operations control centre to communicate directly with the train in case of a conflict or problem.

The trains are equipped with real-time capacity displays inside and outside, and this information can also be accessed via the VBB app.