PARIS Metro has begun operation of the first of a fleet of automated eight-car rubber-tyred MP14 trains on Line 14, following an inauguration attended by Ms Valérie Pécresse, president of Île-de-France Mobility, and Ms Catherine Guillouard, president and CEO of RATP. 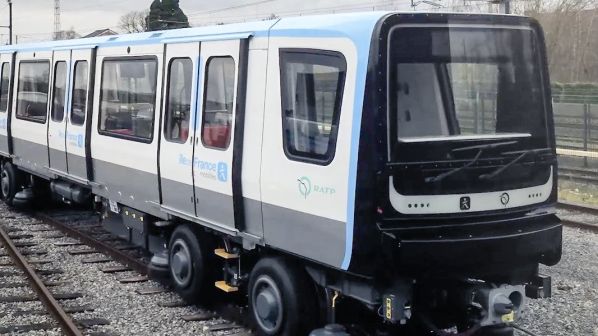 The remaining fleet will be delivered in phases until 2024 following the opening of the 5.8km Gare Saint-Lazare - Mairie de Saint-Ouen section in mid-December this year. Initially, the trains will operate alongside the 90m-long six-car MP05 trains currently in service on the line, before taking over completely from 2022.

The trains are being assembled at RATP’s new maintenance facility in Saint-Ouen, which was developed to maintain the new 120m-long trains.

During the transition period, when both trains are in operation, temporary signage will be provided to enable passengers to position themselves in the right place for boarding.

The MP14 offer reductions of 17% in energy consumption compared with the MP05 due to a regenerative braking system, more efficient motors and LED interior lighting.

The fleet is part of a €2bn 15-year framework contract agreed with Alstom in 2015, which allows for the order of up to 217 MP14 trains, 112 of which have been purchased to date. The contract is financed entirely by Île-de-France Mobilités.

The trains will accommodate for increases in passengers, which is expected to double from 500,000 journeys per day presently to one million per day by 2024. When fully phased in, the trains will be capable of operating at 85 second headways during peak periods.

The trains were also purchased in anticipation of future extensions to Line 14, including a line from Mairie de Saint Ouen to Saint-Denis Pleyel in the north, which is scheduled for commissioning in 2023, and to Orly Airport in the south, which will be commissioned in 2024.

Automated six-car MP14s are also expected to begin operation on Line 4 from 2021, and manual five-car versions with a driver’s cabin will run on Line 11 from 2023.