The order will comprise 34 EMUs which will enter service from late 2024. 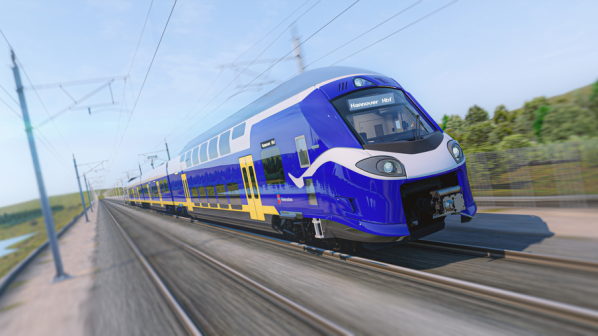 LOWER Saxony Transport Authority (LNVG) has selected Alstom as the preferred bidder for a contract to supply a fleet of 34 part double-deck EMUs worth €760m.

The final train will be retained by Alstom to test onboard ETCS systems ahead of its rollout on the network. 18 additional single deck trailers are being ordered in order to support five-car consists from 2028, increasing capacity to 525 seated passengers. Multiple operation of the four-car and five-car trains is also envisaged.

LNVG says that it will formally award the contract to Alstom by March 8 if the decision remains undisputed. State-owned leasing company, LNVG, will own the trains. DB Regio currently operates the EBN network, which is currently being tendered, with the winning bidder obliged to use the new fleet.

Under the contract, Alstom will also be responsible for the maintenance and supply of spare parts for the fleet for the duration of its 30-year service life and will construct a new maintenance depot in Bremen.

The trains will be partially funded with €420m provided by Lower Saxony’s Ministry of Economic Affairs. The combined package of vehicles, workshop and maintenance is worth around €800m.

The trains will offer level boarding at stations, and include areas for people with reduced mobility, multi-purpose areas and bicycle storage, and will be the first trains in Germany to make use of the new DE3 loading gauge, offering more head room for passengers on the upper deck.

The trains will also be equipped with CCTV, a seat occupancy monitoring system, passenger information systems and Wi-Fi, and will have interior noise levels of between 61dB and 68dB.

Energy consumption will be almost halved to 9kWh/km when operating as an eight-car train, compared with 15kWh/km for the current seven-car double-deck coaches operated on the routes, which are hauled by Bombardier Traxx locomotives.

“Lower Saxony has never ordered so many new trains in one go,” says Dr Bernd Althusmann, Lower Saxony's minister of economic affairs, employment, transport and digitalisation. “This investment from the state's funds sends a clear signal: we want to further strengthen rail traffic, and our focus is on modern, barrier-free mobility and climate protection. This will strengthen competition and ensure high-quality transport offers on Lower Saxony’s railways.”