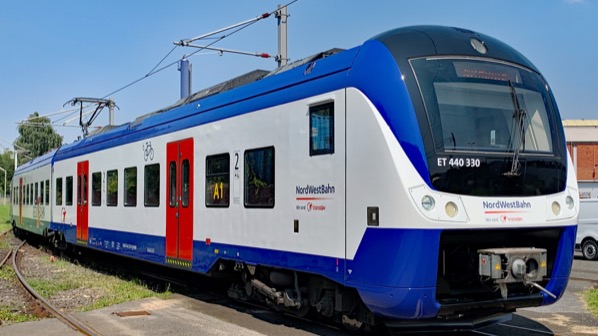 The first of 35 Coradia Continental EMUs to be refurbished for NordWestBahn.
Photo Credit: Alpha Trains.

Talbot Services carried out the work on the three-car class 440 EMU, owned by Alpha Trains, at its plant in Aachen. It is the first of 35 EMUs that will be refurbished for the project. Talbot is set to work on a further 17 three-car and 17 five-car sets from January 2023 with two trains being refurbished at the same time and each EMU taking six weeks. Alpha Trains says this is the largest project of its kind in its history.

During refurbishment the EMUs, delivered in 2010-11, are fitted with Wi Fi including a preliminary set-up for 5G, new passenger information systems with large screens and real-time information for connecting services. Power sockets for charging e-bikes are being fitted as is energy-efficient LED lighting, tinted scratch-resistant foil and power outlets for passenger devices.

The EMUs are also being painted in a new Transdev livery and receiving new interior design including new seat upholstery and covers, new armrests and tables. Disinfectant and fragrance dispensers are being fitted in the toilets.

A guidance system for blind passengers has been installed while door buttons with a locator tone are being fitted. There is also improved access for passengers with reduced mobility as well as those with prams and bicycles.

“The project is a prime example of how tried and tested rolling stock can be upgraded and refurbished to provide passengers with a level of convenience similar to that of new trains,” says Mr Thomas Schmidt, Alpha Trains managing director.

“The prototype train offers a great foretaste of what awaits our passengers on the entire Regio-S-Bahn route network from 2023 onwards,” says Mr Ulrich Ehrhardt, managing director of NordWestBahn.

The EMUs are used on the 270km S-Bahn network that has been operated by North West Railway since December 2010. The company won a new contract in 2019 to operate the network from December 2022 until December 2036.

The operator will introduce 16 new Stadler Flirt XL trains from December 2022, expanding the fleet to 51 trains. These are also leased by Alpha Trains.