The trains will be introduced in the Czech Republic’s Ústí nad Labem region. 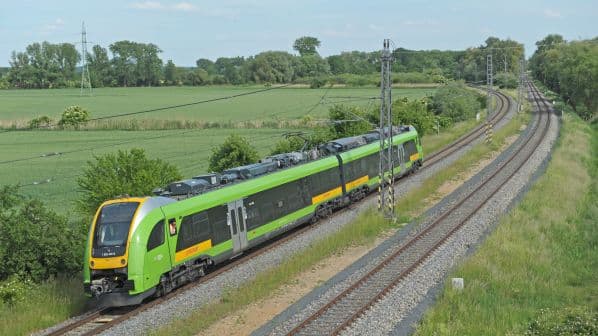 The EMU on test at the Velim test circuit.
Photo Credit: Quintus Vosman

CZECH private operator RegioJet will introduce Pesa Elf.eu EMUs on regional services on lines U5, U7 and U13 in Ústí nad Labem from December 12, which it operates under contract to the public transport authority.

RegioJet is the launch customer for the new Elf.eu EMU, a 160km/h design aimed at both the domestic Polish and other European markets that can operate under both 3kV dc and 25kV 50Hz electrification. The trains are fitted with onboard ETCS supplied by Alstom.

The seven two-car sets for RegioJet meet the requirements under the TSI-PRM for passengers with reduced mobility, and have low floor, barrier-free access 600mm above the rail head. One door is equipped with a lift for wheelchair users, and the trains have space for wheelchairs, buggies and bicycles along with an accessible toilet.

The new trains can each seat 154 passengers, and feature power sockets, Wi-Fi, audio-visual passenger information systems and onboard CCTV.

The Czech city of Brno and RegioJet have concluded a public service obligation (PSO) contract for direct services between Brno and Vienna International Airport at Schwechat from the introduction of the 2023 timetable on December 11. The contract runs until June 10 2023 and comprises 299 services during this period.

The PSO contract initially includes services on Mondays, Wednesdays and Sundays, with RegioJet operating the service on a commercial basis the remaining four days of the week. From February 20 2023the PSO contract will cover all trains.

Three services will operate each day, two of which will continue to Prague. RegioJet also operates a commercial Prague - Brno - Vienna (- Budapest) train that offers a connections to the airport via a RegioJet bus.

Tickets between Brno and Schwechat are available from Koruna 299 ($US 12.91).