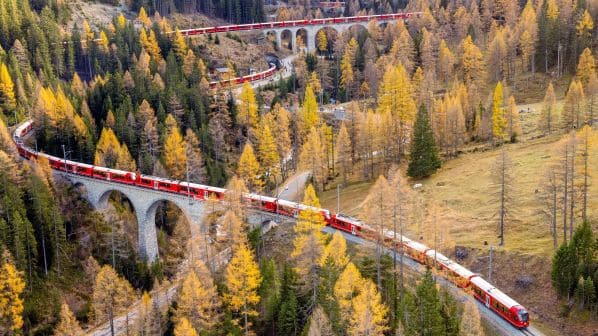 An aerial view of the 100-car RhB train snaking around the spiral curves and viaducts of the Albula Valley.
Photo Credit: Philipp Schmidli/swiss-image.ch

Following eight months of preparation, the much-heralded event saw a 1906m-long train comprising 25 four-car Stadler Capricorn EMUs, making 100 vehicles weighing 2990 tonnes in total, negotiate the tortuous 789.4m descent from Preda to Alvaneu. This includes the many spiral tunnels and viaducts of a 24.93km stretch of the Unesco World Heritage route through the Albula Valley.

The event was staged as a festival in the mountain valley and thousands of spectators witnessed the train’s snaking descent of the line’s many sharp curves at an average speed of 30-35km/h. The train set off from Preda at 14.20and reached its destination, the crossing of the 65m-high Landwasser Viaduct, at 15.30.

The event was held both to mark the 175th anniversary of the first domestic railway opening in Switzerland and to celebrate the engineering achievements and scenic beauties of the World Heritage route. The Albula Line is on the regular route of RhB’s flagship tourist trains the Glacier Express - which runs from Zermatt via the Matterhorn-Gotthard Railway to St Moritz - and Bernina Express, which runs from Chur via a 2253m high pass to Tirano in Italy.

“After intensive preparation, we are overjoyed to have achieved this world record,” said RhB director, Mr Renato Fasciati, after the record was confirmed by Guinness World Records. “Not only did we have a wonderful railway festival here in Bergün, but we were able to present ourselves around the world as a fascinating and innovative mountain railway thanks to our dedicated partners, sponsors and an incredibly dedicated team.”