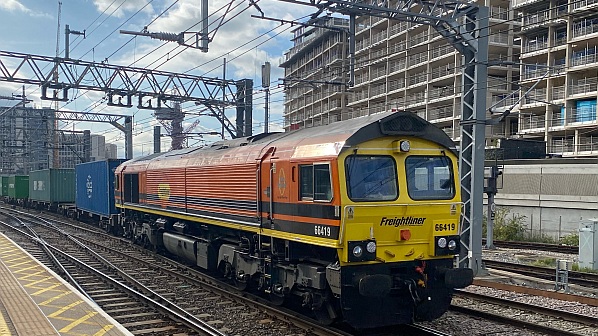 FREIGHTLINER will replace all its electric operations with diesel traction “temporarily” due to a 210% increase in wholesale energy prices in Britain between September and October.

The operator has Britain’s largest fleet of operational ac locomotives for freight use and only recently acquired 13 electric class 90s in order to help further decarbonise its business.

The decision has been made less than three weeks before the COP26 climate change conference is held in Glasgow, Scotland, from October 31.

“As a result of an unprecedented increase in electricity prices, Freightliner has taken the difficult decision to temporarily replace their electric freight services with diesel-hauled services in order to maintain a cost-effective solution for transporting essential goods and supplies around the UK,” a Freightliner spokesperson told IRJ on October 13.

Operators are charged for electricity that electric trains use via a pass-through cost. The temporary withdrawal of the fleet will be kept under review according to the operator. “We will continue to explore options around alternative fuels and other technologies aligned with our sustainability strategy, but consistent with industry research, electrification remains the most suitable means of decarbonising rail freight,” the company says.

Sources within the rail industry have raised concern that replacing electric locomotives with diesel traction will increase journey times which could also then have an impact on passenger timetables. DB Cargo UK and Direct Rail Services also operate freight trains in Britain using electric locomotives, albeit with smaller fleets.

“The significant increase in the price of electricity is challenging, however we have no plans at the present time to suspend operating our fleet electric locomotives,” a DB Cargo spokesman told IRJ. “What this issue does underline, however, is the need for a diversified approach to decarbonisation.”

DRS operates a fleet of bi-mode Stadler class 88s. “Our fleet of locomotives offers the flexibility to adapt to changing market conditions while maintaining a safe, secure and reliable service,” a spokesman told IRJ.

“That might mean we change the type of traction we use on our train services in response to temporary fluctuations in energy prices.”

British infrastructure owner Network Rail (NR) told IRJ that electricity costs for NR and passenger operators were negotiated some time ago and are fixed for this year and most of 2022. “A few operators, however, are subject to the current market wholesale price of electricity that NR passes on directly at cost,” a spokesman explained.

A Rail Delivery Group spokesperson told IRJ that the rail industry is Britain’s single biggest consumer of electricity, and that because of this many operators “club together” to buy in bulk, saving money and insulating themselves from short-term fluctuations in price. This often locks prices in for three to four years with the current deal having around 2.5 years left to run. RDG says this covers around 80% of the electricity used by freight and passenger trains in Britain.

“Nevertheless, like households, not all train companies are on fixed tariffs and, where increased costs are not covered by the contracts operators have with the Department for Transport (DfT), they may need to take short-term action to afford their bills,” the spokesman said. “Transporting goods by rail is still a green option with each freight train taking 76 lorries off the road.” Unlike passenger operators in Britain, the freight companies operate on an open-access basis and do not have contracts with the DfT.

Britain’s freight locomotive fleet is not that large. On October 13 there were 43 serviceable ac locomotives available for domestic services across the DB, DRS and Freightliner fleets. Nine were hauling trains.

DB has a further six locomotives for Channel Tunnel duties that only run on HS1. GB Railfreight’s (GBRf) electric locomotive fleet is also currently deployed only on cross-Channel or Caledonian Sleeper operations and so is unaffected.

Between DB, Freightliner and GBRf there are a further 47 ac locomotives currently stored and out of use in Britain. DB and Freightliner are both conducting trials using alternative fuels in diesel locomotives.