The new trains will be deployed on services to Germany. 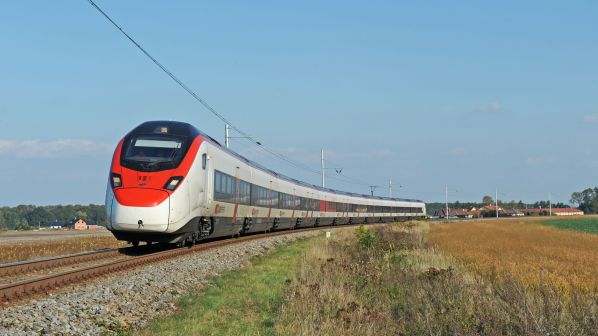 SWISS Federal Railways (SBB) has ordered seven additional Giruno inter-city EMUs from Stadler for SFr 250m ($US 255m) that will operate international services to Germany from 2026.

The order has been placed under an option in SBB’s contract with Stadler that was signed in 2014, and which saw the last of the main batch of 29 Giruno EMUs delivered on May 10 2021.

The latest batch will be able to operate at up to 250km/h on high-speed lines in Germany, and will be deployed on direct services routed via Basle.

The Giruno is an 11-car EMU that is 202m long, with seats for 405 passengers, offering a boarding height of 550mm from platforms in Switzerland, Austria and Italy, and 760mm in Germany.

Stadler says that the Giruno exceeds the requirement of Swiss accessibility legislation, offering twice as many wheelchair spaces and accessible toilets as the law requires.

SBB says it is working with DB to develop international services between Switzerland and Germany, noting that demand was constantly growing before the Covid-19 pandemic. SBB says passenger traffic between the two countries is already back to 2019 levels.

“We are proud to be delivering seven more of our high-speed trains to SBB,” says Stadler chairman of the board and group CEO, Mr Peter Spuhler. “The train is a result of the long-standing and successful cooperation between SBB and Stadler.”