THE Government of Upper Bavaria has approved the first Avenio TZ LRVs for use on the Munich light rail network, with the LRVs coming into service on December 10. 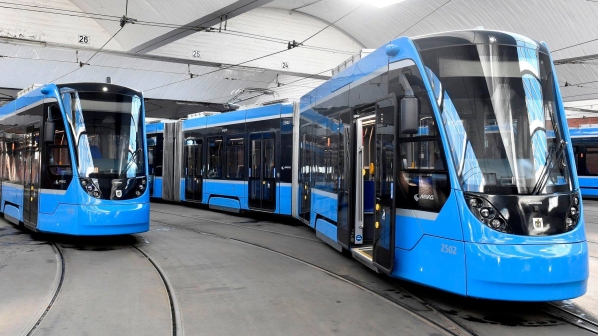 MVG awarded Siemens a contract in 2015 to supply 22 low-floor LRVs with options for up to 124 additional vehicles. The order comprises nine two-section, nine three-section, and four four-section Avenio vehicles.

The four-section and five two-section LRVs have entered service, while the remaining 13 LRVs are undergoing the commissioning and approval process. The two-section vehicles, which will initially be used on Line 12, will in future be connected to the three-section LRVs during weekdays to increase capacity.

This is the second batch of Avenios ordered by MVG, following an initial tranche of eight four-section vehicles, which entered service on Line 19 in 2014.

The latest Avenio LRVs have a slightly different front-end design compared with the previous version, with doors that can be closed by the driver and flashing LED lights which alert passengers. The vehicles are also equipped with more handrails, intercoms on the doors to communicate with the driver, repositioned passenger information systems for better visibility, and wider gangways.

The vehicles are designed to be fitted with batteries for catenary-free operation along the planned line through the English Garden.