SEOUL Metro has started to introduce a second batch of new trains on Line 2 as part of the replacement of the entire fleet of 460 cars operating on the Korean’s capital’s busiest line. 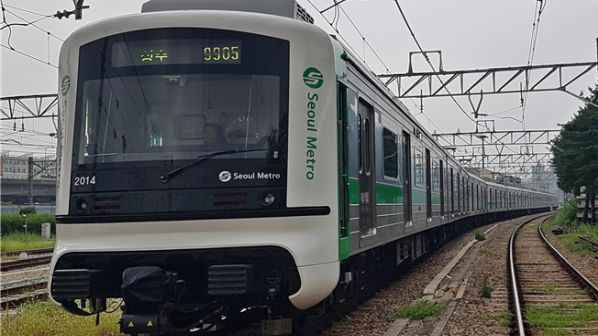 One of the new trains for Seoul Metro Line 2.

The first 10-car train from a batch of 10 trains being supplied by Hyundai Rotem is now operating on Line 2, and Seoul Metro has received another five trains which are being commissioned. All 10 trains will enter service during the first quarter of 2020.

The new trains have a smart real-time information system which automatically alerts engineers and train controllers about malfunctions. Real-time data from vital equipment is saved so that pre-emptive maintenance can be carried out if required.

The number of CCTV cameras in each car has been increased from two to four to eliminate blind spots, and there are now four devices per car to improve air quality. The trains also have regenerative braking.

This is the second batch of new trains to be delivered for Line 2 following the entry into service last year of 20 trains supplied by Dawonsys, Korea. Seoul Metro is currently in the second phase of a seven-year plan to replace a total of 610 cars on lines 2 and 3.

Seoul Metro says that it now plans to replace the 1304 cars operating on lines 4, 5, 7 and 8. Seoul Metro awarded a Won 373.1bn ($US 317.7m) contract to Woojin Industrial Systems (WJIS) earlier this year for the supply of 299 cars for Line 5 and 136 cars for Line 7. The first train will be delivered in August 2020 and delivery of the final train is scheduled for November 2022. This is WJIS’ first order for metro trains. The trains will have permanent magnet synchronous traction motors and a real-time smart information system.

Seoul Metro plans to issue a call for tender for 210 cars for Line 4 by the end of this year.