Hybrid trains will enter traffic with NEB from December 2024 on 10 routes across the VBB network. 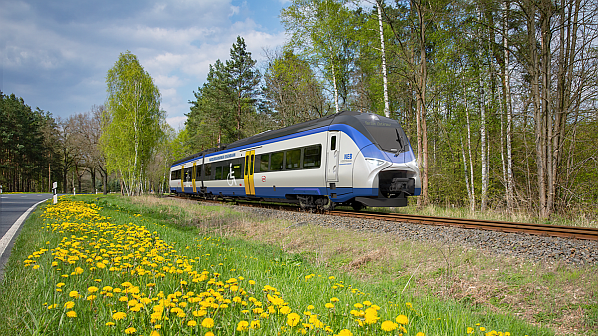 NIEDERBARNIMER Railway (NEB) has awarded Siemens Mobility a contract for 31 two-car battery-electric Mireo Plus B trains that will operate on 10 lines of the East Brandenburg network from December 2024. The contract also includes 12 years of maintenance and the supply of spare parts.

NEB retained the East Brandenburg network contract in June, and stated it would order 26 battery-electric trains. This has been increased to 31 trains.

The 47m-long 15 kV, 16.7 Hz trains will be fitted with lithium-ion batteries that will be charged when the train is operating on electric power. Regenerative braking will also power the batteries which will have a range of more than 90km when operating on non-electrified lines.

Each set will be fitted with three doors on each side and barrier-free interiors. Capacity will be for 128 seated passengers while there will be 12 spaces for bicycles, wheelchairs and buggies. Wi-Fi, a real-time passenger information system, and specially designated family area will all be fitted to the trains, as will around 60 electrical sockets that will be spread evenly through the train, USB charging points and locations for inductive charging

The trains will reduce annual consumption of diesel fuel by around 4.4 million litres and will eliminate local CO2 emissions. They will operate on the following routes:

“As the first battery-electric, multiple-unit train in the VBB network, the Mireo Plus B provides real added value in terms of climate compatibility and economy compared with existing trains operating with combustion engines,” says Mr Guido Beerman, minister for transport for the State of Brandenburg.

“The new trains along with the increased service frequency will significantly improve the offering for passengers,” says Ms Susanne Henckel, VBB managing director. “There is, in fact, no alternative: Environmentally friendly rail must be further supported and expanded.”