The two vehicles were delivered to Chennai as kits earlier this year. 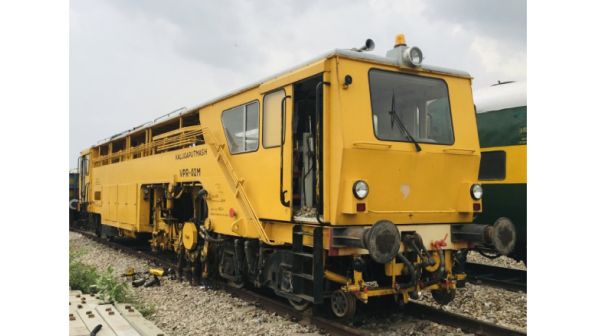 SINARA Transport Machines (STM), Russia, has begun assembling two RTM-32 work site tampers at San Engineering & Locomotives’ facility in Bangalore, India, in order to meet the 51% localisation requirements of the contract. The machines were ordered by Indian Railways (IR) in 2020.

The kits for both machines were delivered to the port of Chennai in February, but assembly of the machines was delayed due to the Covid-19 situation in India at the time. However, Sinara says the vehicles are due to be delivered on time by the end of the year.

Each kit includes two fully assembled undercarriages, the hydraulic transmission, hydraulic motors with a pumping station, air compressor and generator. The vehicles are also equipped with a remote control and digital control system, diagnostics and control systems for servo valves.

The machines, used during track construction, repair and maintenance, will be assembled at STM’s partner company by STM experts who will also supervise them when they enter use.

“The Indian railway market is one of the key export directions for STM,” says deputy general director for sales and general director of STM Trading House, Mr Anton Zubikhin. “At the moment, our company is supplying equipment to its Indian partners for the amount of €20m. Moreover, I would like to note that the signing of these contracts was a result of tough competition with the world leaders in the railway equipment manufacturing sphere, including producers from Austria and the United States. We are by no means going to slow down. On the contrary, it is our plan to take part in the next tenders for the supply of various equipment for a total amount of more than €200m.”

STM has also developed the design documentation and adapted it to IR’s requirements. STM is also supplying 19 ballast regulating and levelling machines to India.

An interview with Sinara CEO Viktor Lesh, on the plans for the company to expand in Russia and abroad, appeared in the April issue of IRJ.