IRJ at InnoTrans 2022: The first of 80 ForCity Smart tram-trains were unveiled. 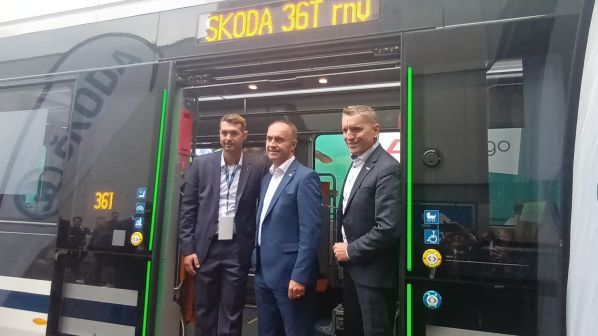 Skoda is building 31 30m-long tram-trains, 37 40m-long and 12 60m-long vehicles. The two longer versions are designed to split in half for maintenance. The fleet has smart data functionality for predictive maintenance.

Five of the short units are equipped for catenary-free operation along a 1.5km section which runs past a hospital in Heidelberg, while all the vehicles can operate catenary-free for up 800m in an emergency and for shunting in the depot. The fleet is also designed so that the full modular battery pack can be installed for extended catenary-free operation. A 60m vehicle can be converted into two 30m units by adding new cabs.

The T36 has 100% recuperation of braking energy using supercapacitors. It is driven through the bogies which are fitted with high resilient wheels to improve the ride quality.

“This project is very important for our company and is one of the fundamental pillars of our future,” in der Beek said. “The new LRVs are tailor-made for our requirements which are different from other German cities as our vehicles operate as trams in the cities and trains in between and we are the only German city to do this on metre-gauge track.”

Skoda expects to supply the first completed vehicle to RMV before the end of the year to start the testing and certification process which will be more complicated than for conventional LRVs as the vehicles must meet both tramway and railway regulations especially regarding crashworthiness. To accelerate commissioning, a lot of the software testing has already been carried out. RMV wants the new tram-trains to enter service in time for a large gardening exhibition in April 2023. Delivery will be completed by the end of 2024 or early 2025.