A driver assistance and detection system can automatically adjust the speed of the LRVs supplied by PK Transport Systems. 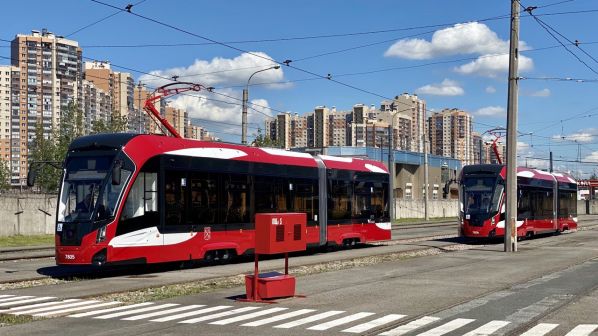 The Cognitive Tram Pilot system supplied by Cognitive Pilot, Russia, a joint venture of Sberbank and Cognitive Technologies Group, provides continuous detection of roadside objects, warning the driver if a collision is going to occur, and stopping the vehicle if no action is taken.

The first LRVs have entered service on Line 24, which runs from the southeast to the city centre. This will be followed by further LRVs on 10 routes by the end of July. PK Transport Systems is supplying 77 71-923M vehicles and 61 three-section 71-931M Vityaz M LRVs under several contracts, including one signed in February. Delivery will conclude in November 2023.

The Cognitive Tram Pilot system for the 1524mm-gauge “smart” LRVs consists of two cameras mounted under the windscreen in the driver’s cab as well as a radar detection system located beneath the body panel at the front of the tram.

The system has a detection range of 100m and provides continuous detection of surrounding objects, such as pedestrians, traffic lights, vehicles, and road signs. Based on this information, the system recognises and predicts the development of a traffic situation, informing the driver if action is required, or applying the brakes if necessary. It is also able to enforce a safe speed limit, preventing the driver from exceeding the pre-set speed. In addition, it can offer insight on the condition of infrastructure, such as damage or clogging of rails, broken traffic lights, sagging contact wires, or fallen trees.

Tests of the system have taken place in St Petersburg and Moscow since 2018, including on public roads.

“We, together with PK Transport Systems and Gorelektrotrans, have launched one of the world’s first projects for the industrial use of AI systems to manage public urban transport,” says Cognitive Pilot CEO, Ms Olga Uskova. “Our system is capable of ensuring safety in any weather, in any traffic conditions: night, rain, fog, snow, glare, and any time of the year.”

Cognitive Pilot has engaged in a similar project to develop autonomous LRVs with Shanghai Fuxin Intelligent Transportation Solutions (Fitsco) in Shanghai, and says the next stage of the contract is now underway. Uskova adds that the system, which is manufactured in Tomsk, Russia, uses 70% domestically-sourced components and work is underway to replace imported components with domestic alternatives.